Many people noted the irony of the NBA's cracking down on Donald Sterling's racism while the NFL supports Dan Snyder's racism. Some tweets and images on the subject:

Dave Zirin ‏@EdgeofSports Apr 26
It's very difficult to look at universal condemnation of Donald Sterling's racism and not think about the pass given to Dan Snyder. 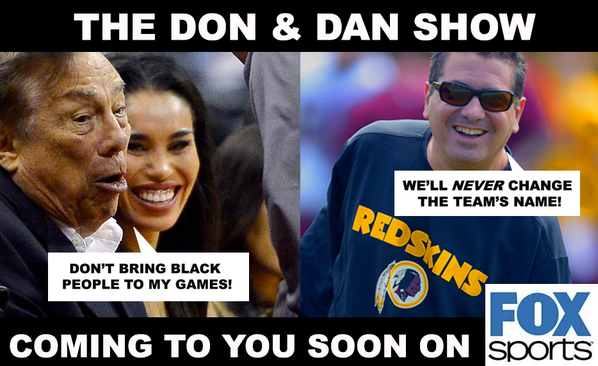 BlueCornComics ‏@bluecorncomics
Why not "Sterling didn't mean any harm, he's helping black people, there are more important things to worry about"? Because #racism is EVIL.

BlueCornComics ‏@bluecorncomics
That shiver you just felt was every sports team owner with a racist Indian mascot wondering if he's the next Donald Sterling. #ChangetheName Unless it's the Redskins and Chief Wahoo? Time to start applying our disapproval of racism to every sports team in America.

Getting the ball rolling

The first of what undoubtedly will be many postings on the subject: 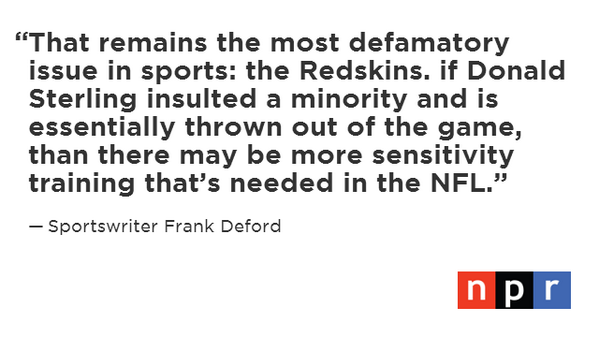 Dear R*dskins Stars: The Clippers Show You Don't Have to Fear Your Owner

For more on the subject, see What Bundy and Sterling Tell Us and NBA Bans Sterling for Life.
Posted by Rob at 2:00 PM