What Bundy and Sterling tell us

The paternalism of rich white men aka the 1%:

Donald Sterling's racism is cut from the GOP playbook--a classic case of "makers vs. takers" delusion

Donald Sterling’s racial views are worse than Cliven Bundy’s, yet some on the right defend the racist billionaire 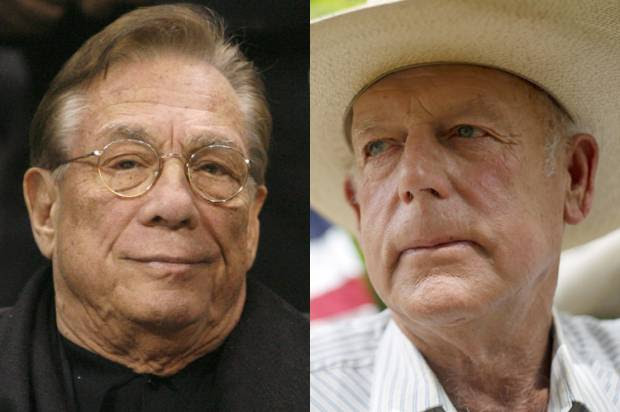 White racism won’t just die off: No utopia awaits when retrograde attitudes like Donald Sterling and Cliven Bundy’s are gone

Sterling and Bundy belong to a different generation, but Paul Ryan and the Supreme Court are enshrining white power

By Brittney CooperDonald Sterling was more than just a “painful episode”

The Clippers owner has been publicly shamed and banned from the NBA. But that won't fix the root of the problem

By Roxane GayComment:  Bundy and Sterling have been rich and racist most of their lives. They've been acting on their racist beliefs all this time. Sterling even had a record of housing discrimination. Yet most of us are just learning about this racism, just reacting to it now.

Both cases are great examples of how systemic racism surrounds us. People like Bundy and Sterling are in charge of the large powerful entities--government, business, the military, churches, the media--that dominate our lives. And this power is mostly invisible to the naked eye.

What matters isn't whether our next-door neighbor is considerate or not. What matters is who's in charge of things such as defense, finance, taxation, health, welfare, education, and the environment. And the answer is generally rich white men who support the military-industrial complex run by other rich white men. They decide who gets most of society's benefits, and it's them, not us.

For more on systemic racism, see Whites Think They're Losing to Blacks and Educating DMarks About Systemic Racism.