Natives in The Swarm

A couple of years ago I read the German sci-fi thriller The Swarm. It has a Native theme at its core and two Native characters. Here's the story:

Comment:  The Native theme is the usual one: that all living things are connected. That we must live in harmony with nature rather than try to control it.

I don't know enough about scientific matters to critique the book technically, but the two Native characters are problematical. Let's look at them.

Leon Anawak is a young marine biologist specializing in whales. He ran away from home at age 12 because his father was drunk and abusive and his mother enabled him.

He's so ashamed of his past that he won't even admit being Native. Someone guesses he's Makah because the Makah hunted a whale and he might disapprove, but that isn't it.

For starters, his name sounds Inuit--like anorak--so Inuit would be a good guess. Presumably he looks Inuit also--a look somewhat different from American Indian. But no one makes the connection.

More important, his feelings of shame don't make sense. Why blame the entire culture rather than just his abusive family? Why not say, "I'm Inuit but I hate the place I came from?" It's just weird that he refuses to name his heritage as if that will somehow protect him. What does he think...that his fellow scientists will point and laugh at him because he's a Native from a bad home?

People used to deny that they were Native...but that was 50 or 75 years ago. I haven't heard anyone doing it recently. With all the social movements going on, Natives are reclaiming their traditions these days. As we've seen with the hipsters and other wannabes, it's "cool" to be Native now.

It seems author Schatzing has ignorant or outsider understanding of Native life. He thinks Natives are still downtrodden and any smart Native would repudiate his troubled past. But readers of Newspaper Rock know that just isn't so.

Anawak eventually visits his home in Cape Dorset, Nunavut, and learns it's experiencing a cultural renaissance. To him, this is a big shock. He's amazed that everyone isn't drunk and defeated-looking like they were two decades ago.

But Nunavut is in newspapers and on TV several times a week. You can read about it in blogs or on Facebook pages. Anyone with an Internet connection should know that things are changing among today's Inuit. It's implausible that a man who lives in Canada and uses a computer would be totally oblivious to the developments.

Greywolf is half Native but does an Indian schtick for the tourists. He braids his hair, wears fringed outfits, camps out in tipis, and talks portentously about the spirits. Anawak accuses him repeatedly of being a fraud, a white man playacting as an Indian. In other words, a wannabe, though I don't think Anawak uses that word.

You occasionally see or read about people who act this way. They're usually white men who claim to be a tiny bit Cherokee, or European hobbyists who claim they know Native traditions better than modern Indians do.

What they usually aren't is half Native. Someone with that much "Indian blood" would be accepted in every US and Canadian tribe I'm aware of. Greywolf wouldn't have to pretend to be "Indian," he'd be Indian. Everyone except a few traditionalists--extremists who demanded full-blooded purity--would accept him as such.

Again, Schatzing's concept of Natives rings false. He understands how wannabes act--at least stereotypical wannabes who earn all the criticism from Natives. What he doesn't understand is that the wannabe label doesn't apply to people who are half Native.

Unless he was given up for adoption, someone like that grew up with a connection to a Native parent and his or her culture. If he wasn't enrolled automatically, he could easily join the tribe of his Native parent. You'd have to work hard to create a situation where someone half-Native by blood was totally disconnected from his past and acted like a white-man wannabe.

I tend to agree with these reviews. The Swarm is a big, sprawling mess with implausible scenes and unnecessary diversions. It's trying to be a Michael Crichton-style thriller, but Crichton's books were always a taut 300-something pages. The Swarm is anything but taut at almost 900 pages. 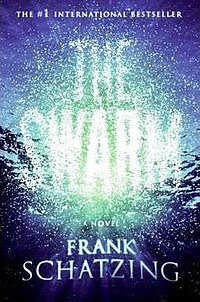