On the Columbus Day front this year, Minneapolis and Seattle passed resolutions to change the name:

By Garrett RichieLater articles addressed this change. In particular, Italian Americans weren't happy about the slight to their hero:

They claim the holiday has nothing to with Columbus, but instead celebrates immigration:

By Zach KayserAlas, the facts don't support their claims: 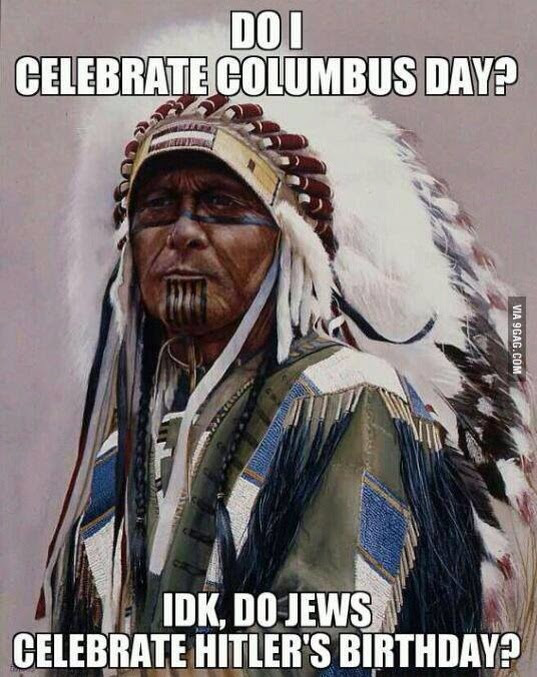 You don't have to dig far to see what Italian Americans are really celebrating. It's the same thing other Americans celebrate: their own "greatness."

Columbus gets his comeuppance: Why his holiday is in deep jeopardy

Mascot for violent European colonialism has been celebrated for years. These major U.S. cities are saying "no more"

By J.P. LawrenceComment:  So apparently it is all about the man and his individual accomplishments after all.

The benefits of "Christian civilization" outweigh any disadvantages? Many American Indians and African Americans would disagree.

And now we're at the crux of the conflict. Italian Americans and other white Americans think they're the center of the universe. They think it's more important to celebrate and honor them than it is to acknowledge the death and destruction of Native cultures. The message is that white peoples' feelings are more important than Native peoples' lives.

It's more than understandable why Natives and their liberal allies don't accept this message. Because it's immoral and un-Christian to celebrate conquest. Killing and enslaving people isn't "civilization," it's barbarism.

The final word is my tweet on the subject:

Below:  A present-day reminder of what Columbus means to most Americans.