The Hero Twins: Against the Lords of Death: a Mayan Myth (Graphic Myths and Legends) 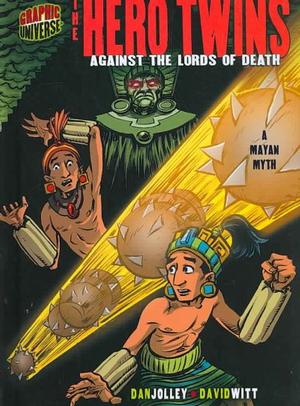 However, reviewer Beverly Slapin notes many discrepancies between the Popol Vuh and Hero Twins. Her conclusion:

Hero Twins Against the Lords of Death: A Mayan Myth

By Beverly SlapinComment:  After reading Hero Twins, I tend to agree with Slapin. It really is simplified to the point where a 3rd-grader might enjoy it.

That may be too simple for any significant story--not to mention a culture's sacred text. Doing the Popol Vuh in 48 pages is like doing the Bible in 48 pages--difficult to pull off.

Dramatically speaking, the menaces aren't that menacing--even for kids. For instance, the gods send the twins into a Fire House full of flames. Do they immediately burn to a crisp? No. When the gods look in on them, they're sitting on a shelf above the flames. It's like the gods are too dumb to come up with a threat beyond a 3rd-grade level.

I'd say Hero Twins is akin to a children's picture book or cartoon show. I was hoping for something a bit more sophisticated when I got it. I'm not sure how I'd introduce kids to Maya culture, but probably not like this.

Hero Twins is $8.95 for 48 pages. Unless you're a completist for Native-oriented comic books, save your money for something else.
Posted by Rob at 4:12 PM