How about tribes funding arts?

A correspondent wonders if gaming tribes should get into the entertainment business. Not by hosting artists at their casinos, but by making art themselves. Some thoughts on the subject:The Oneidas of New York own a studio that's doing animation. The Chickasaws have sponsored a CD and a publishing press. They and a couple of other tribes have done comic books. Another couple of tribes have helped finance movies such as Black Cloud and Older than America.

But in general, tribes are just starting to branch out. They're conservative by nature and afraid the white man will take away their hard-gotten gains. This is understandable but perhaps short-sighted.

I suspect they'll get into the arts in a decade or two. I wish it would happen sooner, because tribes could help themselves by telling their own stories. Movies, TV shows, music, videos...these are the currency of pop culture.

That applies to comic books too. They're a relatively cheap way to tell cultural stories. Educators can use them to help children read and preserve Native languages.

P.S. As a publisher of Native-themed comic books myself, I'm totally unbiased on this subject, naturally. 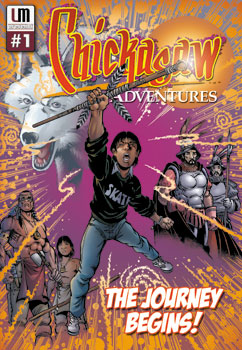