What supporting the UN declaration means

Here's the "Announcement of U.S. Support for the United Nations Declaration on the Rights of Indigenous Peoples" Obama promised at the tribal summit:

Announcement of U.S. Support for the United Nations Declaration on the Rights of Indigenous Peoples

And some comments on its language:

UN hails U.S. Backing For Declaration on the Rights of Indigenous Peoples

Here are what I consider the key points after skimming this document, along with some good rejoinders from a Facebook friend:

1) No mention of actually endorsing or signing the declaration. The US simply "supports" it.The UN already passed the declaration by a 143-4 vote. I don't think we'll get an opportunity to officially reverse our vote or the equivalent.

But Canada did more than simply "support" it:I'm waiting to hear about that level of commitment from the US.

2) The US offers no criticisms of or changes to any of its existing laws or policies. In fact, in a couple of cases it redefines the declaration to match existing laws and policies.I expect our government to be more critical. It can shift the blame to past administrations, so it doesn't have to criticize itself. But pretending that everything's rosy and the problems are nearly solved doesn't help anyone.

Of course, I also expect our government not to crack down on Wikileaks simply for revealing confidential information. The government should operate much more openly and transparently--as Obama promised. Part of that is tolerating if not encouraging constructive criticism.

3) The Obama administration provides a long laundry list of its accomplishments and implies Obama is giving Natives everything the declaration demands. Therefore, the declaration doesn't require anything except a continuation of Obama's policies.The list is impressive, but the declaration and the tribal summits exist to move forward, not backward. The point is to identify, address, and resolve outstanding issues and problems. Congratulating ourselves for past accomplishments doesn't do anything to improve conditions in Indian country. 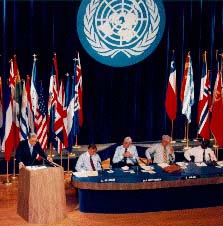 Wording is everything. The US and its laws have a perverse and corrupt tradition of reversing legislation and amending everything that gets voted on.

I have not seen any reversal in Bush's policies from Obamas administration that puts any teeth into what Bush and Cheney did and do, to show the American people real transparency.

Bush had a secret government, plain and simple. Everything from open records; presidential papers; military; financial and corporate dealings were all done without public input with the use of public tax dollars, and former military and corporate buddies landed jobs controlling federal agencies.

What does this have to do with the UN Declaration?

The US government and its people do not care what the rest of the world does for its indigenous peoples, especially its own.

The only way American Indians have ever, or will ever make real change or light up a bulb in the American mind is by violence. I am not agreeing to this way, but America only respects and fears, destruction.

Talk is not only cheap, its a waste of time for Americans until something or someone lights a match under its belly.

Look at your history and tell me I am wrong Rob!

"The only way American Indians have ever, or will ever make real change or light up a bulb in the American mind is by violence. I am not agreeing to this way, but America only respects and fears, destruction."

The lessons of Dr. King need to be remembered, too.

Dr Kings lessons in theory and philosophy have my utmost respect and admiration, if this were a world fitting of his character, but it is not, and his brief existence only proves that this world was not made for men such as him.

Throughout the worlds history, men like King were martyred, tortured, assassinated and crucified for being peacekeepers, while men of destruction rose, and rise, to prominence, prosperity and success.