Doug George-Kanentiio:  Navajo man helped save environmentAnd:Comment:  For more on Richard Nixon, see Iron Eyes in Frost/Nixon and "Dickie, Don't Forget the Indians." For more on Western vs. Native values, see Columbus the Cannibal and Why We Believe in Columbus. 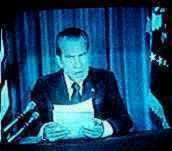