By Thom HartmannAnd:Comment:  We make a fetish out of eating human flesh, which some indigenous tribes apparently did. But they'd be much more appalled at our clearcutting whole forests or exterminating whole species. Why is one act "immoral" or "evil" but not the other? Because our culture arbitrarily says so.

For more on the subject, see Why We Believe in Columbus and What a Native Utopia Looks Like.

P.S. The "?" stands for a character that isn't readable. I don't know what it's supposed to be.

Below:  Let's kill all the buffalo...because they're there! 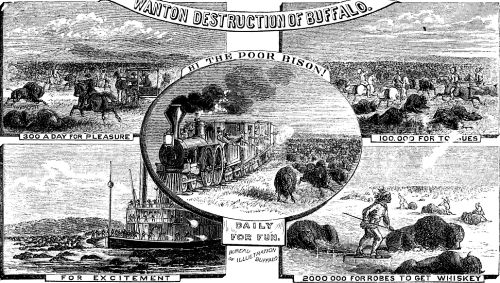 Which tribes were cannibals supposedly? I hope you don't believe in that absurd Man Corn book.

I've never heard of Man Corn. But I have read old accounts of the Winnebago.

Scott is referring to this book:

I haven't read Man Corn, which sounds like a stupid title. I was referring to claims such as these:

A: Not for the most part, no, but there were some groups who were. The Aztecs were notorious for ritual cannibalism (warriors would eat a strip of flesh from enemies they had slain in combat). Some people dispute this, but the Aztecs' own written and oral histories seem to support it as the truth. The Karankawa tribe of southeast Texas was also said to practice ritual cannibalism on defeated enemies. There were a few Amazonian tribes who practiced funerary cannibalism (family and friends would eat part of a dead tribal member's body as a religious ceremony at the funeral). Finally, the Carib people of South America were said to kill and eat prisoners of war, though it's been pointed out that the Spaniards who made this claim were lining their own pockets by doing so (Queen Isabella had forbidden her subjects from selling Africans, or Indians, as slaves unless they were cannibals).