2008 Stereotype of the Year loser

Stereotype of the Year loser

Stereotype of the Year dishonorable mention

Indiana Jones and the Kingdom of the Crystal Skull

These entries "win" for propounding ugly stereotypes in a popular medium with a lot of visibility and a long shelf life.

Below:  A bucking bronco...indoors! Wes Studi shows how wild Indians can be in Comanche Moon. 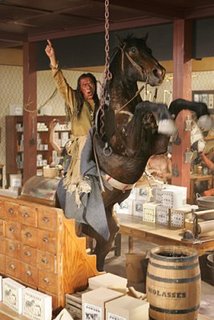 dmarks said...
This comment has been removed by a blog administrator.
6:32 PM

Burt said...
This comment has been removed by a blog administrator.
3:47 PM

I said it before and I'll say it again: Stick to the subject or I'll delete your comments.

You do more than that Rob, you tend to delete the subjects as well. That is why Dmarks and I posted on this one, you arbitrarily decide when and what can be discussed.
If you choose to censor our writings, how are you different than those you oppose?

Won't be long before this comment I am making, and the one above it, are also deleted.

I don't even know what "delete the subject" means. Except for one or two postings where the links were no longer valid, I've never deleted my blog postings.

FYI, it's not censorship when you're free to post responses elsewhere. Nothing requires me to tolerate people's ridiculous opinions. In the case of Stephen M. calling me ignorant, Geno calling me a racist, or DMarks defending teabaggers, they've literally never come up with an argument I couldn't crush. I've seen it all before.

Since this blog is a record of my views, I feel obligated to rebut these worthless challenges. I'd rather not waste the time. Since I've proved I can do it before, it's unnecessary to do it again.

If you don't like my policy, post responses in your own blogs where I'm not responsible for them. Trying to circumvent the policy is simply childish, if you ask me. I'm not going to allow it so stop trying to do it.