While discussing the history of the Roanoke colony, a book makes an important point:

By Tanya LeeComment:  The question of how much the Indians knew about the transmission of disease usually isn't clear in history texts. But this book apparently takes a clear stand on the issue:This reiterates what I said last year in Disease = Invisible Bullets? The Indians couldn't distinguish disease from black magic, but they knew the English were transmitters. Stopping them was necessary to prevent the epidemics that inevitably accompanied them.

Imagine a shipload of plague carriers was moving into your neighborhood. Would you be justified in taking extraordinary steps to keep them out and protect your family? Yes. If all else failed, would you be justified in killing them in self-defense? Yes. Even the "innocent" women and children? Yes. (The Indians may have noticed the weaker women and children were more likely to be sick.)

This is all the justification the Indians needed for many of their so-called massacres. Not only were the colonizers armed with muskets and cannons, they were carrying an invisible weapon: disease. A European landing party was akin to the launch of a biological WMD.

Let's recall what actually happened. For the most part, the Indians treated the first colonizers as welcome guests. They helped and traded with the newcomers as long as they were friendly. When the Europeans continued expanding their settlements, the Indians grudgingly gave way. They started killing people only when the Europeans pushed beyond their established boundaries into Indian territory.

One could argue that they were much more tolerant than they should've been. With 20-20 hindsight, they might've attacked every rowboat of Europeans before it landed. Since some of the passengers were akin to "Typhoid Marys," why not?

Though the massacre deaths were regrettable, the Indians had every right to defend themselves from disease. The Europeans had enough experience with colonizing by then. They should've known better than to set foot in a strange land when some of them were sick. By endangering the Indians with their depraved indifference, the Europeans got what they deserved.

For more on the subject, see Genocide by Any Other Name....

Below:  "Look...more ships! There's an excellent chance we'll all be dead within six months. Should we a) greet them warmly or b) discourage them from landing? What would they do in our position?" 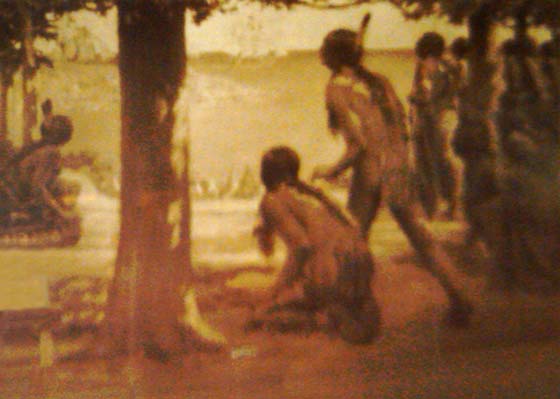