Adrienne Keene fills us in on the "Conquistabros and Navajos" party at Harvard in her Native Appropriations blog:

The text of the invitation:Adrienne's mockery of same:She goes on to list several problems with the party concept, including:And a commenter on Adrienne's blog added this important point:Comment:  Yep...any time you use the "bros and hos" formulation, you're demeaning women and blacks as well as anyone else you're targeting. This is rarely if ever acceptable, and certainly not at a place such as Harvard.

For more on the subject, see Why Minstrel Shows Are Wrong and Stuff White People Do:  Indians. 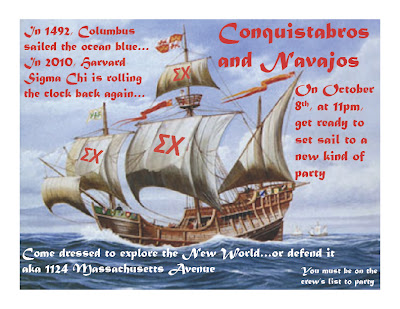 Another article on the subject quotes Newspaper Rock:

"All in all, it seems like a stupid idea, even if we don't know the details. If we did know the details, I'm sure it would seem much worse," commented Newspaper Rock, a blog "where Native America meets pop culture."

Adrienne Keene deconstructs a response from the National Chapter of Sigma Chi:

Harvard Sigma Chi Update #2:  An Email from the National Chapter

First, the phrase "I'm sorry you were offended" instead of "I'm sorry they were offensive" (which, to be fair, Sigma Chi totally did use the second phrasing in their apology in the newspaper) implying that I'm being "overly sensitive," rather than that there could have been an actual problem.