By Liz DayComment:  FYI, the wedding was held in Adventureland near Tom Sawyer's Island and the Haunted Mansion. Pocahontas married her sweetheart John Smith and lived happily ever after before marrying John Rolfe and dying miserably in England. 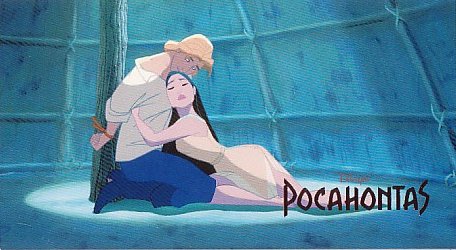 Well I guess finding where Pocahontas was married supercedes where Bin Laden is hiding out?

Only a matter of time before they figure out that Bin Laden is hiding out as the villain in another Disney cartoon, "Aladdin".

Bin Laden turned himself into a djinni? (Ja'far does that at the end of Aladdin.) Interesting...

Speaking of the Middle East, I didn't like how the Middle East article kept bringing up the Jewishness of certain people. I will say that the main reason intellectuals seek to discredit Islam is that they are cowards. Everyone in college questions religion, but in mainstream America, it's impossible to question Christianity. Islam, however, is related to Christianity, and Muslims have many of the same laws as the Old Testament, with the universality doctrine of Christianity, and it just happens Muslims are the current scapegoat, so you can denounce Muslims all day on Fox News.

"Everyone in college questions religion, but in mainstream America, it's impossible to question Christianity"

In mainstream America, I hear Christianity questioned strongly, all the time.