In Wednesday's episode of Modern Family, titled Unplugged (airdate: 10/20/10), Cameron and Mitchell are trying to get Lily into an exclusive preschool. Afraid that being a gay couple with an Asian daughter isn't enough, Cam decides they need more. He begins talking to the admissions officer in a low, slow voice like that of a stereotypical Indian:But wait, there's more. The tag-end during the credits shows another excerpt from the admissions office:Comment:  This routine is obviously meant to be embarrassing. And Mitchell and the admissions officer are embarrassed by it. But that's not enough to make it okay.

Cameron could've claimed to be part Indian in his normal voice. He could've said something modern, like, "How about Obama's tribal summit last November?" or "I was just checking out the tribe's powwow schedule on its website." Then the bit might've been funny.

Instead, he portrayed a stereotypical "dignified" Indian. One who's too out of touch to speak proper English. Who drops references to ancient lore as if he's never seen the 20th or 21st century.

Imagine Cameron had announced he was 1/16 black and made the following speech:Nobody would even think of putting on that kind of minstrel skit on the air. But the Indian bit is the same thing. It stereotypes Indians as some exotic ethnic group outside the American mainstream.

Below:  Mitchell and Cameron. 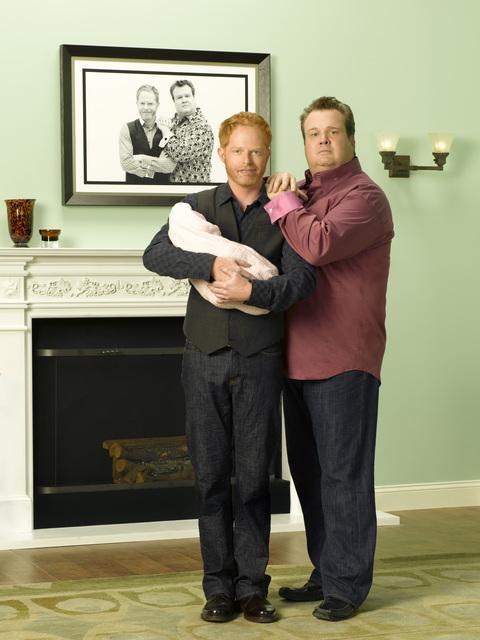 There was also a woman dressed up like Pocahontas the night before on a Halloween episode of "Parenthood." This new set of family-oriented shows is getting an F in my book!

Thanks, Mal. I covered that show in "Pocahontas" in Parenthood.