Here's a comic book about a superhero team that debuted a few months ago:

As you may recall, Black Condor is a Navajo superhero. That means this comic book always has a Native potential. This time it gets realized.

FREEDOM FIGHTERS #1 begins with a six-page sequence in an Arizona Indian casino. Other than a bear statue in front, it's blissfully free of Native stereotypes. There are no greeters in chiefs' headdresses, no waitresses in buckskin mini-skirts....nothing like that.

True, the bad guys call the Indians "Pocahontas" and "Geronimo," but they're racists. I'd say the only misstep is when one neo-Nazi says of the Indians, "We shoulda driven these immigrants out of America centuries ago." This line is too stupid even for an ignorant bigot. Moreover, the rejoinder--"they were here first!"--is practically a cliché. Every Columbus Day and Thanksgiving we hear jokes about how the Europeans were the first illegal immigrants.

Close encounters of the supernatural kind

Later in the story, the Freedom Fighters visit Devils Tower (misspelled "Devil's Tower" in the comic). Black Condor says, "I sense a great power. This mountain is a sacred place to many tribes for different reasons." This is more or less an accurate summary of the situation, and it's nice coming from the Native hero.

Black Condor adds, "The legend is that all of the tribes came together here and fought a great battle." I don't think this part is accurate. At least, I've never heard of a legend like that.

The heroes explore the butte's interior and find four Native-style demons of earth, air, water, and fire. They say: "You have foolishly awakened us...imprisoned here by the shamans of a hundred tribes! We are the Four Corners! We are the renegades! We are death!"

The Four Corners name is cute, but it doesn't make sense for demons that predate the Four Corners junction two states to the south. And elemental beings aren't very original or interesting. This is the kind of kid staff that has turned me off to comics.

Alas, I wasn't interested enough to continue buying FREEDOM FIGHTERS. Judging by the reviews above, those who kept reading aren't happy with the results either. 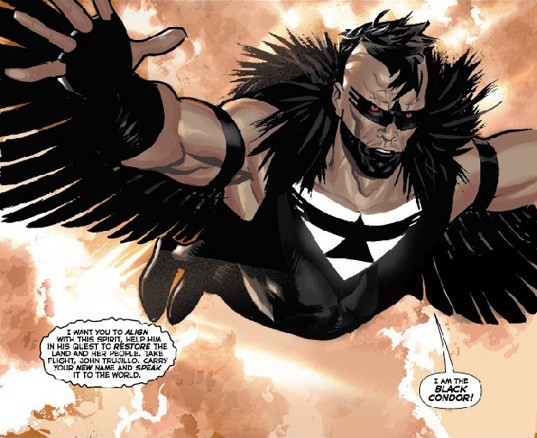