Here's an article on Cristobal Colon, aka Christopher Columbus--apparently a direct descendant of his namesake. The interesting part is his take on his ancestor.

Christopher Columbus on his complicated relationship with Americans

By Alejandro D ZajacComment:  It's "political" that Columbus enslaved and killed Indians? No, it's a fact. Facts generally aren't political unless you're a Republican teabagger.

The last sentence is the only one that's even slightly true. Not all the Spaniards were greedy thieves, rapists, and killers. A few of them were probably as fine as Spaniards anywhere.

Below:  "Cristóbal Colón in front of the replica of a ship sailed by his ancestor." 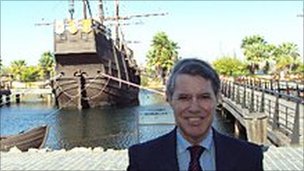