The TV show Happy Endings, which debuted last year, is kind of a twentysomething Friends. Last week it had a Native-themed episode, Yesandwitch (airdate: 10/12/11).

The show begins with Penny announcing her mother Dana is coming to visit:This uncritical view of Columbus doesn't bode well for the episode. And things do get worse.

Here's the bit we're concerned with:And the result:This scenario is unlikely, to put it mildly. When people "discover" they have an Indian ancestor, it's usually from a big Midwestern tribe: Cherokee, Creek, Chippewa, Choctaw, etc. You know, where people have intermarried freely with their white neighbors.

The Navajo are one of the most isolated tribes, meaning there's much less chance of intermarriage. Remember, we're talking about Dave's great-great-grandparent, who would've married in the mid-19th century. Yes, a Navajo could've married one of the few white settlers in the sparsely inhabited Arizona Territory when Indians were considered marauding savages, but it's unlikely.

But there's no reason to think this is a fraud or mistake. Somehow Dave's grandparents never mentioned that one of their grandparents was a full-blooded Indian. So let's go with the claim that he's genuinely 1/16 Navajo.

A little later, Penny, Dave, and Alex are at an outdoor restaurant. Dave is wearing a fringed leather jacket, Penny questions him about it.The episode's problems begin to multiply. Dave makes up a victimhood story for his jacket, which no real Native would do. Then he makes up a Navajo legend about a witch who lives in the sand.

His goal is nominally to boost his truck's business, but he isn't talking to his customers. He's talking to his friends, and to the audience. He, which means the show's writers, are making up a phony Navajo rap for our benefit.

So Indians are victims living in the past. Indians have strange beliefs about evil magical beings. And anyone who's 1/16 Navajo can claim to be an Indian. That's what we've learned so far.

It turns out Dana is depressed because her husband is leaving her. The gang tries to cheer her up.Okay, Dana finally bursts Dave's bubble. He isn't Native just because one of his 16 great-great-grandparents was.

The reference to Iron Eyes Cody, the crying Indian, is okay because Dana is being sarcastic. She's mocking Dave's belief that he's an Indian, not mocking Indians.

But she's upset, and Dave doesn't concede the point. Moreover, Penny reinforces Dave's "Navajo" identity. The message to the audience is muddled at best.

Again, Dave's use of a Navajo word is a positive. I think he said something about nizhoni. That roughly translates to "walk in beauty," a core Navajo philosophy. It might be something you'd say to a depressed person who's lost her way.

Finally, Dana and Penny sing a number at a boat show. The gang arrives with a group of well-wishers to cheer Dana on. I think Max calls them "Americans and Natives." The implication is that the group includes some of Dave's "friends" from the Indian center.

One is clearly an Indian. He looks like actor Rick Mora, although someone assures me it isn't Mora. He doesn't say anything, but we get a few glimpses of him. There may be other Natives in the crowd, but they're gone too quickly to be sure.

This is a mildly pleasant ending, but it could've been better. The show should've had a few more lines to address the whole "Navajo" thing. Something like:However you say it, you get the idea. Introduce real Indians to counteract Dave's "fake Indian" routine. Show the audience that Indians are like anyone else.

All in all, Yesandwitch wasn't a bad episode. The ending and the Navajo words almost counteracted the misguided beginning.

These days, a lot of TV shows take this kind of uneven approach toward Natives. They try to be sensitive, to send a positive message, but they can't help using clichés and stereotypes. It's better than pure stereotyping, but it leaves much to be desired.

Below:  Dave in his "Navajo" jacket watches the singers with an Indian behind him. 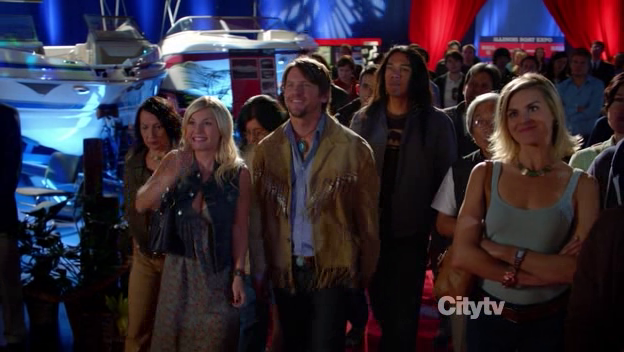 You forgot rape. Dude's ancestor could've been a Navajo woman raped by a white settler. That child could've then married a caucasian, especially if the child could "pass" for white.

I didn't think Navajo was a particularly "lottery" one. Being a real Indian is, in terms of social status, like the Flokati rug: Everyone wants to be an Indian, but the amount of racism's ridiculous. I mean, now they portray us as what? Greedy casino owners? Hmm...Where have I seen that before? Somewhere.

Or a white woman raped by a Navajo man, of course. Although that undoubtedly happened less often.

Good point, Anonymous #1. Dave was so cheery about his new-found ancestry that I didn't think of a rape scenario.

I decided the lottery line referred to being an Indian, Anonymous #2, not a Navajo. You know, because of the casino checks and government benefits every Indian gets.

It also may refer to the "tribal trend" I've reported on before. These days, being an Indian does seem to be popular.

But the meaning is unclear, which is the mark of dubious writing. The writers should've rephrased it.

Indeed, they should've called it a jackpot or winning lottery ticket, not simply the "lottery." A weak line all around.

FYI. One of the writers for the show is Navajo.

Well, the Flokati rug reference I made was to Press Your Luck. (For those who don't remember, it wasn't a whammy, but it was the least valuable prize on the board. Including the cash prizes..)