Here is Harjo's full statement on why she's performing:Comment:  Actually, she didn't quite say that Palestinian students support her. She said the audience will include Palestinian students, and the [unspecified] students have written in support of her. The second group of students could be different from the first group. It could consist entirely of Israelis.

Harjo refused an invitation to the White House and stepped down from a tenured university position. What made her respond differently to this conflict than to those conflicts?

Is it because she promised, and she considers her word inviolable? I could almost see that, though upholding a promise to defy a boycott isn't the place to stand on principle.

What did Harjo say?

It also would be interesting to hear what she said to the mostly Israeli audience. Did she challenge them on the issues?

She was vague about her intent. "I came to be in support of justice and compassion," she wrote, but "I will let the words and music speak for that place beyond those who would hurt and destroy for retribution." Does that mean she addressed the injustices of the present situation? Or did she speak and sing "beyond" them, which means avoiding them?

To me that's a key issue. If you're defying a boycott to engage in a dialogue, then it should be a real discussion of the Israeli-Palestinian conflict. Singing about peace and love in the abstract won't cut it. That's not standing in support of justice and human rights, it's ignoring them.

For more on the Indian-Palestinian connection, see Harjo Faces Boycott of Israel and LaDuke on Gaza:  "We Are Israel." 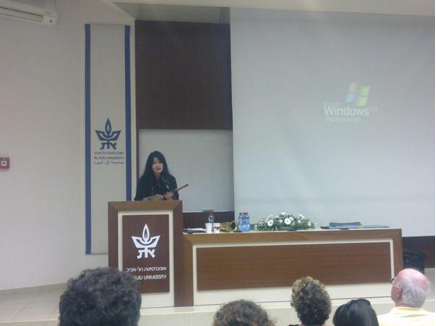