By Sarfraz ManzoorComment:  So much for the idea of Johnny Depp's doing the Lone Ranger "authentically." If the movie were really authentic, it would feature a black protagonist with a Native sidekick.

Below:  "Bass Reeves was one of the first African-American lawmen." 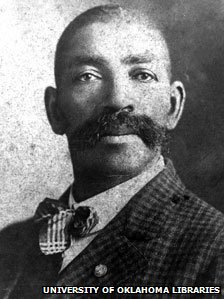