Anthropologist Napoleon Chagnon is famous for portraying the Yanomami Indians as "fierce people"--i.e., violent savages. Recently he came out with his autobiography, so the subject is in the news again.

I've posted on Chagnon and the Yanomami before, and I didn't want to rehash the old controversies. Fortunately, someone sent me a posting that's done the work for me.

The myth of the ‘Brutal Savage’Comment:  The article has links to more articles for further information.

For more on the Yanomami, see Cannibal Indians in Green Inferno and Why The World Until Yesterday Is Wrong. 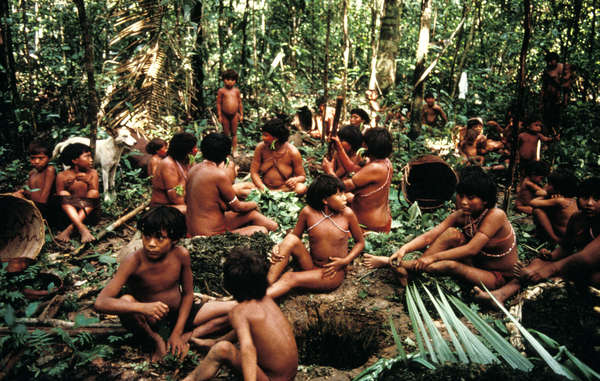 I kinda have a love-hate relationship with Darkness at El Dorado. I understand what they were going for, but it would be more powerful if Tierney hadn't tried to link it to his antivaccine views.

The difficulty with sociobiology, oh, sorry, "evolutionary psychology" (to be PC) is that it has no mechanism behind it. It's mostly entirely just the tautological and teleological notion that 1) X is human nature, therefore 2) X must have some evolutionary purpose, and 3) once we can somehow glean that purpose, it proves that X is human nature. Never mind that 2 is...evolution does not work that way.

Of course, this discussion on Chagnon's methods is rendered moot by the fact that "uncontacted" Indians are anything but. They're basically survivors who avoided the slavery, epidemics, and mass murder associated with the rubber boom of the 20th century. So they're not nearly as representative of Pleistocene ancestors as Chagnon would believe.