Comment:  This commercial doesn't have any Native content except the headline linking the disasters to the Maya. It also doesn't explain what the "2012 Mayan Apocalypse" is.

As Newspaper Rock readers know, the Maya say the year 2012 doesn't signify anything. If it did signify something, it would be transformation, not destruction. But so far the media isn't making this crucial distinction. Starting with the 2012 movie, it's all about the end of the world.

Viewers may wonder if the Maya are somehow causing the disasters rather than merely predicting them. You know those demonic Indians with their supernatural abilities. They're always returning from the dead, fulfilling curses, and harming those who wronged them.

Nor is this the only TV commercial along these lines. Rather, it's probably one of many we'll see this year.

Indeed, I just saw another one--for health insurance, I think. It showed cutouts of people flying off the screen. The message was something like: "The Mayan calendar says you're doomed. Buy our insurance and show the Mayan calendar who's boss."

Again, there's a whiff of a negative message. Namely, that the Maya--those barbaric, human-sacrificing savages--are attacking us via their calendar. Their ancient magic is reaching across time and space to destroy our world.

The implicit hasn't become explicit yet. But I wouldn't be surprised if it does. Look for movies, TV shows, and commercials with "evil" Maya priests threatening to wreak havoc on modern civilization.

Will any movies, TV shows, or commercials show us modern Maya Indians? Who are predicting a peaceful transition to a more enlightened age? Don't count on it. That kind of message goes against our prevailing stereotypes: that Indians exist to kill and destroy, not to create and build.

For more on the subject, see Maya Excluded from "2012" Tourism and Maya Calendar in Saturday Night Live. 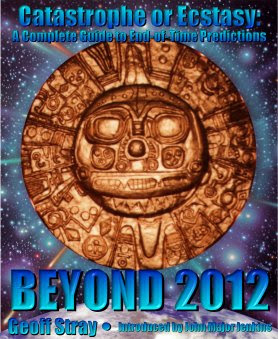