First, on a segment featuring Nicolas Cage and his clone (Andy Samberg), the clone praised the original:Then, in a sketch featuring a cellphone salesman (Bill Hader) explaining phone technology to a befuddled customer (Fred Armisen):These references are trivial, of course, but they're still slightly distasteful.

The first implies Indians are "cunning" even when they're stoic and stone-faced. I'm not sure how that's possible, but it's not a flattering comparison. You probably shouldn't compare anyone to a wooden Indian, or even mention wooden Indians, unless it's to disparage old stereotypes.

The second is just odd. People rarely if ever call an Indian reservation a "settlement." The word implies it's more of a voluntary choice and less of an incarceration than in reality. And 78% of Indians live off-reservation these days, although I wouldn't expect the average American to know that. People shouldn't be surprised to see Indians at cellphone stores, though they undoubtedly would be.

Below:  Nicolas Cage in a headdress? 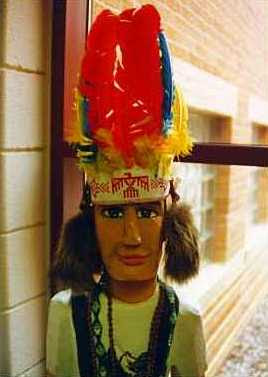