Be Careful Who You Play With...Native Appropriation Rides OnI gather this article is talking about the Raven Tales videos, which I've reported on before. Here are some details from the Raven Tales blog:But according to Kientz, the connection never happened:Comment:  The notion of appearing on Al Jazeera is an interesting question. Do you withhold your Native artwork because you disapprove of Al Jazeera's mission? Or do you proffer it because you believe in its power to change hearts and minds?

Incidentally, I've probably bashed the United States for its flaws and mistakes almost as much as Ward Churchill or Al Jazeera. Do I feel bad about that? Hell, no.

When we launched our war on terror, I spent the better part of a year compiling arguments and writing responses to the "good vs. evil" warmongers. As I often suggested, Ward Churchill was right about one thing. Whether it's Indians or Iraqis, the US has little regard for the lives of non-whites and non-Christians. 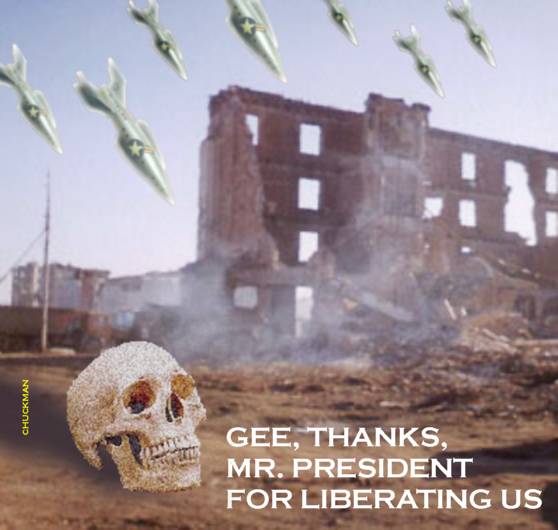 Writerfella here --
Without knowing that much more than is reported here, writerfella still believes the material conceivably could be used for anti-American purposes and propaganda, if only because EuroMan's mistreatment and genocide against Native Americans all is too well known and documented. Let Al Jazeera fight it out with Disney for the network's Mickey Mouse-looking children's character which espouses anti-US rhetoric...
All Best
Russ Bates
'writerfella'

In answer to your question, "...do you withhold your artwork because you disapprove of Al Jazeera's mission?"

YES! In much the same way you wouldn't take blood money from Nazis, the KKK, fascists...

We aren't simply talking philosophical differences here, Rob. We're talking about a media propoganda arm a la Goebbels was for the Nazis during World War II.

Al Jazeera promotes the annihilation of an entire nation and ethnic group. You don't find that just a wee bit troubling?

This isn't about president Bush, this is about an opportunistic liar who has used several different forums...any he could get his hands on to promote his show. The "dressing up like Natives" debacle in the Middle East was just one example of another way our culture is being used by anyone who feels like it for their own agenda.

I did not vote for this president, DO NOT agree with any premise for this current war, however, this is "issue" is not about that and this is nothing more than a very obvious, continual and pathetic grab at attention via any means.

It was going to be someone who whittled it down to the lowest common easy denominator to make it into more divide and conquer amongst our own people about how we feel about a very large and painful issue, one of many...all because of a greedy EP for a cartoon.

That's the trouble with this blog, there aren't any of the other comments publicly, in writing and on tape made by this party. There won't be. So much for trying to keep it a simple and potentially intelligent commentary on a disgusting situation.

Chris Kientz here, let me clear this up a bit…

As one of the two creators of Raven Tales, I have often talked about Al Jazeera Children’s Channel and their approach to us by way of illustrating an irony, that a Native American television show can be find a broadcaster everywhere else but the United States. Perhaps my sense of irony doesn’t translate well.

When the Globe and Mail ran their article on Raven Tales back in Nov. of 2007 we had not finalized an agreement with Al Jazeera because of moral reservations and never did. Let me repeat, we have never been shown on Al Jazeera and never will be. Feel free to look up their programming schedule or speak with them directly.

We did go forward with Maori TV, NHK and NRK. Maori TV serves the indigenous population of New Zealand, NHK is a Japanese children’s station and NRK serves the indigenous Norwegian population, otherwise known as Sami. We are still looking at offers from ZDF, a German children’s station and Canal J. To date, we have received no firm offers from any US broadcaster.

As for Native American POV, I’m not really sure I understand the post. Who is the opportunistic liar promoting his show? There isn’t really a single person promoting the show, but two initial creators and a lot of others who’ve worked very hard to help develop something special. Our ongoing hope is to create a series that will show Native American children that their culture is every bit as rich and colorful as the Pan-European culture that bombards them every day with meaningless 30 minute toy commercials that are passed off as educational tools.

If you want a better sense of who I am…read the following:

And please Native American POV, tell us who you are and how you’ve come to see me, and by extension, all of us at Raven Tales Productions as liars.

Yes, what are you talking about, "Native American POV"? As far as I know, Chris Kientz and the Raven Tales people haven't said anything false. And they certainly haven't gone overboard in promoting Raven Tales. The last time I heard of their work was when I linked to their YouTube video back in November.

I also don't know what you mean when you refer to "the trouble with this blog." I post everything I think is relevant to Newspaper Rock and hold nothing back. If there are quotes floating around from someone associated with Raven Tales, I haven't seen them. E-mail them to me and I'll decide if they merit posting.

As for Al Jazeera, the following article is relevant:

It is vilified as a propaganda machine and Osama bin Laden’s mouthpiece. In truth, though, Al Jazeera is as hated in the palaces of Riyadh as it is in the White House. But, as millions of loyal viewers already know, Al Jazeera promotes a level of free speech and dissent rarely seen in the Arab world. With plans to go global, it might just become your network of choice.

False, though the network makes little attempt to disassociate itself from those who do. This claim is one of the loudest arguments that Western critics have levied against the Arabic-language news channel since its inception 10 years ago, when the Doha, Qatar-based network pledged to present all viewpoints. Just as it describes in its motto, “The opinion and the other opinion,” Al Jazeera has lent airtime even to hated political figures and extremists, including prominent members of al Qaeda. It’s this willingness to present terrorists as legitimate political commentators that has prompted outspoken critics such as U.S. Defense Secretary Donald Rumsfeld to refer to Al Jazeera’s coverage of the U.S.-led wars in Afghanistan and Iraq as “inaccurate and inexcusable.”

After all, when Al Jazeera offers its estimated 50 million viewers exclusive interviews of Osama bin Laden, it’s easy to confuse access with endorsement. And when a journalist who conducts those interviews is jailed for collaboration with al Qaeda, as Tayssir Alouni was in a Spanish court last year, the line between impartial observer and impassioned supporter is certainly blurred. In addition, al Qaeda is not the only terrorist group that reaches out to Al Jazeera. Besides the infamous bin Laden tapes—at least six of which the network has still never aired—Al Jazeera has also received tapes from insurgent groups in Iraq, renegade Afghan warlords, and the London suicide bombers.

But the network has never supported violence against the United States. Not once have its correspondents praised attacks on coalition forces in Iraq. The network has never captured an attack on the coalition “live,” and there’s no evidence Al Jazeera has known about any attack beforehand. Despite claims to the contrary, the network has never aired footage of a beheading. As for Alouni’s case, conclusive evidence has yet to be presented to the public. And there is nothing to suggest that the network’s funding is illegitimate. Allegations of supporting terrorism remain just that—allegations.

Wrong. Just as Al Jazeera has proven willing to present al Qaeda’s “perspective,” it has also devoted airtime to and welcomed another regional pariah—Israel. The network was the first Arab channel to allow Israelis to present their case in their own words, in Hebrew, English, or Arabic. This move was a major departure from past practices and truly shocked the Arab public. Until Al Jazeera arrived, most Arabs had never even heard an Israeli’s voice. Al Jazeera regularly airs clips of Israeli officials within news bulletins and conducts live interviews with six to 10 Israelis each month. The network covers Israeli affairs extensively and is widely watched in Israel. In fact, Al Jazeera gives more airtime to Israeli issues than any other channel outside Israel itself.

Although Israel has accused Al Jazeera of bias and anti-Semitism (and some of the network’s guests have certainly fit that bill), the network’s coverage has occasionally been of concrete benefit to the Israelis. When Israel invaded Jenin in the spring of 2002, Al Jazeera’s exclusive television reports from within the besieged city thoroughly dispelled rumors of a “massacre,” leading to a U.N. special investigating committee appointed by the secretary-general being unceremoniously disbanded.

Many Israelis even regard Al Jazeera as an important new force for change in the Arab world. Gideon Ezra, former deputy head of the Israeli General Security Service, once remarked that he wished “all Arab media were like Al-Jazeera.” Not all Arabs would agree. Although many Westerners think Al Jazeera has a pro-Arab bias, many Arabs believe exactly the opposite. It is widely held in the Arab world that Al Jazeera is financed and run by Mossad, MI5, or the CIA, so as to undermine Arab unity. Just as Bahrain banned Al Jazeera from reporting from inside the country because of a perceived Zionist bias in 2002, Al Jazeera’s bureaus in Arab countries have often been closed down, accused of besmirching the Palestinians or disseminating other kinds of imperialistic anti-Arab propaganda.

Well, Native American POV? I'm still waiting for evidence that anyone has lied in this thread. As Clara Peller might put it, where's the beef?

By the way, I've been criticizing Republican presidents since Nixon. If you think I'm slamming Bush to get attention, you're sadly mistaken.

Writerfella here --
But there was no trace of beef in 'Native American POV's remarks, only bull...
All Best
Russ Bates
'writerfella'