Naturally, the violence in our culture is one of my biggest concerns. It's one of the main reasons I created a comic book called PEACE PARTY that stars two nonviolent Hopi Indians.

Here are some of the pages I've devoted to violence, particularly youth-oriented violence:

Why exactly is violence a core subject for an enterprise devoted to Indian comics? It stems from the fact that the Western/European/American mindset is selfish, greedy, acquisitive, aggressive, warlike, and domineering. This cultural worldview has a myriad of consequences:

Mountains, rivers, and forests are plundered for their wealth.

So a greedy, violent attitude as ancient as the Bible is the problem. And the values embodied in indigenous cultures--community, respect for nature, looking ahead seven generations--are a potential solution. In other words, we need more stories like Whale Song and PEACE PARTY. ;-) 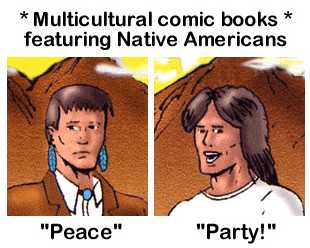