Birdwatchers:  A tribe's fight for justice

The cast had never acted and scripts were impossible, but Chilean director Marco Bechis still managed to make his film about obscure Brazilian Indians. Tom Phillips finds out how

By Tom PhillipsComment:  Kind of lame that Bechis wanted to devote his time and money to make a romantic film about Indians--a subject he apparently knew little about. But at least he got straightened out when he actually met the Indians. 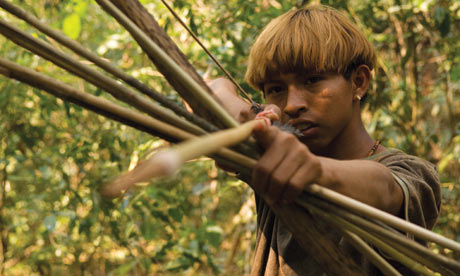 Rob,
Twilight has nothing to do with being real or even realistic. Not that the producers shouldn't have cast appropriately, but having a Native actor on Twilight say to the director "That's not how we really turn into werewloves" makes authenticity a mute point.

So here's my rant today: When are we going to stop seeing Natives as loin cloth or headdress-wearing savages losing to, or being saved by the white man? ENOUGH!

I have seen to many docu-dramas and too many PBS specials about the HISTORY! Then Hollywood comes along and remakes THE LONE RANGER!
Even Windtalkers...Beach is Saved by loser Cage...HURRAY!

I know the Native community understands itself. I know they know their own history. So why do we keep showing the general population these images of "savages" or nomadic wanderers that can't put two words together over and over without balancing that with contemporary, positive, uplifting, visions of hope, success, and a place in modern society...which they have. I know way too many tribes who are making their own path, and Native Americans that successfully "walk both paths" yet that's something we rarely if ever, get to see.

Well, there are some probably Indian "Amazonian Vampire" characters that have a minor role toward the end.

Perhaps they could cast the same people in the roles.

Native actors, especially Quileute actors, might've noticed a dozen little details that were wrong. Not in the werewolf phase, obviously, but in the rest of the movie(s).

Twilight wants to convince us the movies are taking place in Forks and La Push, Washington, near the Quileute reservation. And not in Vancouver, Oregon, or a set in Los Angeles. Therefore, realism is not a moot (not "mute") point.

Rob, sorry for the typos,
You make my point for me. Yes, I too would like to see a nod towards more "realisim" but the fact is the indians in Twighlight are there for one reason: to be werewolves. That is the only thing that serves the story. The thought never crossed the writers, directors of producers mind that "Hey we have a chance here to educate a lot of people about real indians."
In fact you could even assume that the producers would try to stay closer to stereotypres as to "not confuse" the viewing public.
I would bet that 90% of the non-indian population has not a vague idea about the diversity among the tribes and bands of North America.
Keep the faith,
Jet