Marco Bechis's film Birdwatchers urges us to help Brazilian tribes keep their traditional way of life. But is that what they want? And why do we persist in patronising such people as noble savages?

Posted by David CoxI haven't seen Birdwatchers, but Cox's presumption about what the Guarani want is stupid. Most indigenous people don't want to be "noble savages" existing as their ancestors did 500-plus years ago. They want the best of both worlds: the Western conveniences that make life bearable and the Native values that make life worth living.Even if it's true, Cox's statistic about cultivated land is worthless. Developers are cutting down much of the Amazon for logging, mining, or ranching operations, not farms.

Okay to keep stealing?Wow. How many ways is this pathetic paragraph wrong? Let's count:

1) Cox's entire position is based on unsubstantiated speculation about the origins and rights of indigenous people. That makes it worthless from the get-go.

2) Most traditional Natives would deny their ancestors came from Asia. They'd say they've always lived at their present location.

3) There may be some evidence that Polynesians visited South America in the last couple of millennia. I don't think there's any evidence that they arrived here 12,000-plus years ago, when Siberians allegedly migrated across the Bering Strait.

4) Suppose traditional Natives did acknowledge the scientific theories about how the first Americans arrived. Does Cox seriously believe they'd say something like this? "We accept Asians as our ancestors. But if anyone else was here--Polynesians, Africans, Europeans--we repudiate them. We're pure Asians and we deny that any other race tainted our blood."

That's the exact opposite of how a traditional Native might think. Instead, he'd probably say something like this: "It doesn't matter who was here first. Whether our ancestors were Asians, Polynesians, Africans, or Europeans, they all merged into the people you call Native Americans. So the Polynesians were just as much our ancestors as the Asians. We embrace and accept them all.

5) I love how white apologists for genocide use the "two wrongs make a right" defense. "The Indians stole the land from somebody," they say, "so it's okay for us to steal their land." Try that moral defense in a court of law and see how it works.

7) I'm pretty sure that provisions in international law--not to mention the recent UN declaration of indigenous rights, which Brazil signed--do give Indians a legal right to their land. Nor is the concept of ownership a recent development. As we saw in Guarani Is Brazilian National Hero, Brazil's Indians have always fought to keep their land. So have thousands of tribes throughout the Americas.

Cox's stupidity continuesIn other words, the evidence presented in the film contradicts Cox's made-up claims about the film's message. It's pretty clear that Cox doesn't have a clue about what Bechis or the Guarani are really saying.

Cox's conclusion:It may not be clear to Cox what Bechis's message is, but it's clear to us what Cox's message is. Traditional, reservation-based life is bad. Therefore, Indians should give up their way of life and blend into the Brazilian mainstream. Once they abandon their land for the cities and suburbs, developers can carve it up like a turkey.

Some readers of this piece ripped Cox about as much as I did. Their comments include:For more on the film, see Making Birdwatchers and Native Documentaries and News. For more on the issues it raises, see Technology vs. Native Values and Globalization According to Gilligan.

P.S. As usual, I've made minor corrections to the comments to make them more readable.

Below:  "Tribes as spectacle ... the Guaraní-Kaiowá in Marcho Bechis's Birdwatchers." (I guess this is the part where Westernized Indians pretend to be their pre-Columbian ancestors for tourists.) 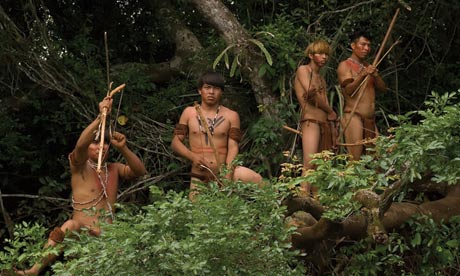