Trying to understand the “help” phenomenon in Native communities

By Jessica YeeComment:  Whether they live on the rez or not, many people want to help Indians. They also want to help others in America or abroad. There's nothing mysterious about this impulse.

The question is what form the impulse takes. Conservatives with "socialist Indians" theories, missionaries with Bibles, teachers with "stay in school" messages, charitable workers with food and clothing, entrepreneurs with business opportunities, and me with my website and comic books. Some of these efforts help and some hurt.

It's hard to say that any of these efforts are all good or bad. I guess the underlying point is that people should listen and learn rather than presume and pontificate. Indian aren't children who need "parents" to help them grow up.

Below:  Maybe the Anglos and Inuit could compromise on prom dresses such as this one: 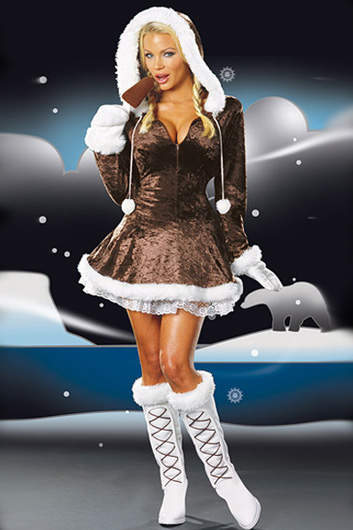 Email ThisBlogThis!Share to TwitterShare to FacebookShare to Pinterest
Labels: philanthropy

I find it perplexing in why the message--"stay in school" is negative to the author, the women writing this story. If you're an indian and you plan to make a living in the white man's world. I think that message needs to be taken seriously. You can't really succeed in the white man's world without an education. Unless you plan to live on the rez for the rest of your life. And also, that education will can be use to benefit the tribal communities. Because tribes tend to work with the U.S. Government on a daily basis from housing to health care etc...

As the article said, the message was "stay in school" as opposed to going hunting and fishing with your communities and elders during the last month of school. Apparently these Natives usually go hunting in May or June--presumably when the wildlife returns.

To be precise, they were telling the youngsters to abandon their age-old cultural practices for one extra month of schooling. They were saying that anything they learned in the classroom was more important than whatever they'd learn on the ice.