The Hero of Hinckley

By Leif EngerIdentifying the rescuer:What the painting shows:Comment:  Steve Premo was the artist on A HERO'S VOICE and DREAMS OF LOOKING UP, the two Ojibwe comics I often mention. I haven't heard much about him since he drew the comics, so it's good to see his other projects.

Below:  "Premo's work is darkly radiant, almost stifling. Looking at it makes you loosen your collar." 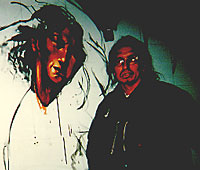