Indians in Ace in the Hole

Kirk Douglas stars in this 1951 movie with a Native subtext:

Ace in the Hole

By Christopher NullAce in the Hole

Ace in the Hole (film)The cave extends from the rear of a Puebloan-style ruin into the mountain behind it. This ruin looked real to me. I was half-wondering if they'd drilled a hole through an old ruin.

I ruled this out because 1) I figured Indian ruins were protected even in 1951, and 2) the ruin was sitting out in the open, at ground level. Most ancestral Puebloan ("Anasazi") ruins are in hidden alcoves or halfway up cliffs.

The rest of the premise--that ancestral Puebloans dug tunnels into mountains and hid treasure there--is phony. So is the claim that the peak, called the "Mountain of the Seven Vultures," is cursed. But no one in a position of authority confirms these claims. We can believe the white man invented them after the Indians were gone.

Tatum certainly doesn't believe there's a treasure or curse. He exploits the legends to write his ticket out of Albuquerque and back to the big leagues.

More from Wikipedia:I guess the media couldn't handle the idea of a corrupt and venal media in 1951. Modern audiences and critics are more open to the idea, and thus the movie:Ace in the Hole has a few flaws, but overall it's a fine movie. Rob's rating: 8.5 of 10. 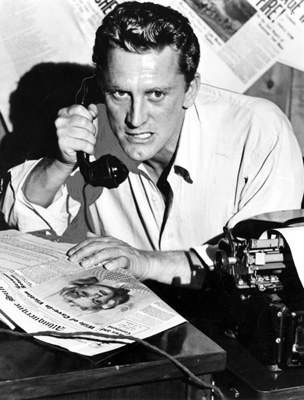