‘Twilight’ Star Bronson Pelletier Talks About The ‘Twilight’ Video Game—Are YOU Excited?Comment:  No, I'm not excited. I might've been excited if a Native actor had played Jacob Black, who gets most of the werewolf screen time. Once again, though, most of the fame went to a non-Native.

The ultimate showdown between vampires and werewolves? So the mostly white vampires who secretly control the world battle a small tribe of savage Indian werewolves. Sounds like a metaphor for America's sorry Native history to me.

For more on the subject, see Vampires = Imperialists in Eclipse, Race in Twilight Movie, and White Vampire Yes, Indian Werewolf No. 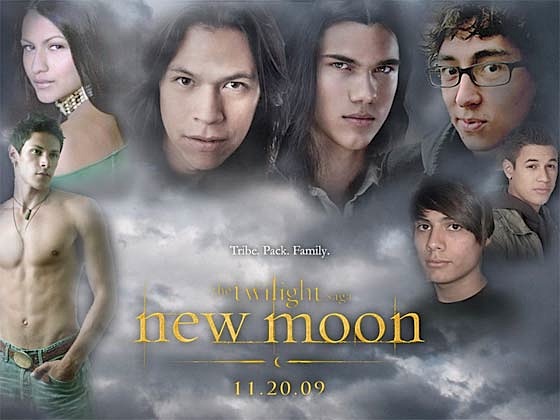 I was so disappointed that this wasn't about a My Little Pony game.

Watch this one closely. These videogames can be huge multi-million dollar productions, with attention given to voice casting.

Will more of the Quilete parts end up going to white voice actors?

A Twilight video game? Seriously? Does anybody remember how hard it was for Nintendo to sell a Barbie game?

Nintendo survived that, so forget that as an example.

Look instead at Atari and its videogame tie-in to the "ET" hit movie. That blunder severely damaged the company.