Review of The North American Indian

Here's something all aficionados of Indians should put on their wish lists:

The North American Indian
by Edward S. CurtisComment:  This is possibly the greatest bargain in the annals of Indian history and culture. The book has 576 pages, perhaps 700 photos, and Amazon.com is selling it for $10.92. That's about 1.5 cents per photo.

Having studied the photographs, I'd say the usual critcism of Curtis is overblown. Yes, he staged his photos. He dressed the subjects in traditional or ceremonial clothes they didn't normally wear. And he eliminated any signs of modern life: no buildings, cars, signs, or pots and pans.

But his purpose was to document traditional Indian cultures, so I understand his intent. If people didn't live this way, they were only a few years removed from this lifestyle. It's not as if he were recreating scenes out of books by people who had never experienced them firsthand.

The worst charge against Curtis is that he romanticized Indians. I don't quite see it. For the most part, the photos are straight portraits. A person standing against a nondescript landscape isn't inherently romantic.

These are sepia-toned photos with hazy backgrounds. It's not as if the Indians are staring wistfully into the distance at purple mountain majesties. I've seen romantic paintings and these aren't the same.

If anything, they're the opposite of romantic. The people in his photos look pretty mundane. When they weren't posing, they were probably suffering: traditional way of life going or gone, forced to take up farming, ceremonies banned by the government, children removed to boarding schools, etc.

A lot of these photos are so prosaic that I can't say The North American Indian is exquisite or magnificent. But as a historical document, it should be one of the basic books in your library. Rob's rating: 8.0 of 10.

Pictured below: A Hopi man from Walpi who could be the model for PEACE PARTY's Billy Honanie. (A Curtis photo that isn't in the book.) 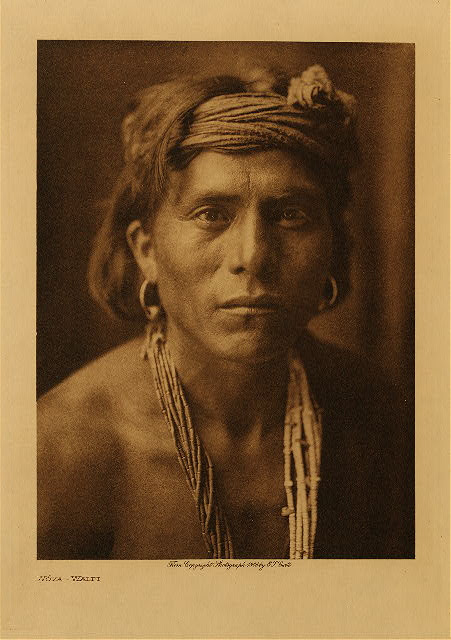 Writerfella here --
One wonders how Rob would review Peter Farb's 1991 MAN'S RISE TO CIVILIZATION: The Cultural Ascent of The Indians of North America. The work attempted to cast a template for the evolution of 'civilization' through a large-scale and complex examination of Native American societies from the Arctic to MesoAmerica. It was Farb's thesis that such a study would allow modern researchers to understand the development of the Chinese and the Egyptians and the Indus Valley peoples and the Minoans and the Phoenicians and the Greeks and the Romans and even Europeans. Farb admits in his Foreword that his undertaking was futile as he was but a single scientist but that his book still resulted in an intensely rich and lushly textured overview of American Indians. It was published in hardback by Dutton and in paperback by Penguin. writerfella's only copy remains safely esconced in The Bates Memorial Library in a respected niche...
All Best
Russ Bates
'writerfella'

I haven't read Farb's book. I'll check it out and let you know (someday).

Writerfella here --
Yes, this is how it will go:
"Someday, over the blogbow,
"Postbirds fly,
"Theres's a land I IM'd to,
"Hoping to tell you why.
"Someday, over the blogbow,
"Posts are blue,
"And the posts that you dared to,
"May be allowed to come true.
"Someday, I'll wish upon your blog,
"And find that I have left myself behind you,
"Where tomcats smell like tuna tops,
"Far and beyond all the Black Ops,
"That's where we'll find you."


Now, do you wish to see THE WIZARD OF OIL, the history of BUSH WARS 1: THE PHANTOM MENACE?
All Best
Russ Bates
'writerfella'

You must've written this doggerel after returning from the gay bar, right?

I somehow missed seeing this bloggerel the first time.