By Kristen CatesAnd:And:Comment:  My Native contacts occasionally express disgust at the idea of having Jackson on their money. I'd say it's time to stop celebrating his expansion of America at the expense of the Indians.

Chief Joseph seems like a good, safe choice to replace him. Sitting Bull, Geronimo, Crazy Horse, and Tecumseh would be too radical for today's Americans.

For more on the subject, see Replace Grant on $50 Bill? and Review of RELENTLESS PURSUIT.

Below:  Out with the Indian hater...

and in with the peacemaker? 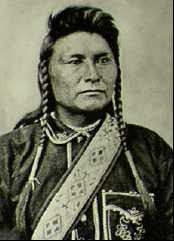 Chief Joseph also has that excellent, accurate, and iconic photo. For others like Tecumseh, there's only artwork, and that might open the door to controversial portrayals.

I've been reading both your good points and your crazy rants (sometimes in the same post) for about 6 months now and they're always enjoyable in one way or another.

I was in the toy aisle with my daughter the other day and I started to notice something that I thought you might have thoughts on. I noticed that whenever Disney puts out a product or a series that features multiple "Disney Princesses" Pocahontas is always left out. Every other human Disney Princess from one of their Summer blockbuster animated musicals is featured, but not her.

On the one hand I imagine that as the archetype of the "Indian Princess" stereotype I'm sure less exposure of Pocahontas in general is just fine with you.

On the other hand, she's a Disney Princess damn it!

Chief Joseph is very regal, and would be a huge improvement over Jackson, but I think Black Elk would be better. Although, I am not convinced that either of them would be thrilled to be on U.S. currency...

Sara: Good point. I was also wondering what any of them would have thought of it.

Whenever I have a $20 bill, I usually break it down to $10 or less. I never really carry a $20 bill on my wallet. Jackson represents a hatemonger, and in the eyes of Natives, he is reminscent to the KKK. Chief Joseph seems like a wise choice.

Geno; Do you break down the $20 for convenience sake, or out of despite for AJ?

Most of the time I would break it down for "convenience sake", but in reality, I don't even worry about about it. Its just money that isn't stay in your wallet forever.

Chief Joseph would work pretty well. Black Elk would imply the "All Indians are Sioux." thing that we should try to avoid. So would Red Cloud, though Red Cloud was a peacemaker. (A bit controversial though: He was involved in an attempt to assassinate Crazy Horse.)

Speaking of which, I have little doubt the one most people would choose for an Indian on currency is Churchill's "photo of Crazy Horse" that isn't him.

As for Pocahontas, she wasn't a princess. But neither was Mulan (general, yes; princess, no). Disney still calls them princesses.