I knew they were out there, but Adrienne Keene of Native Appropriations sent me more images of Indian skulls in headdresses.

There are these from Zazzle: 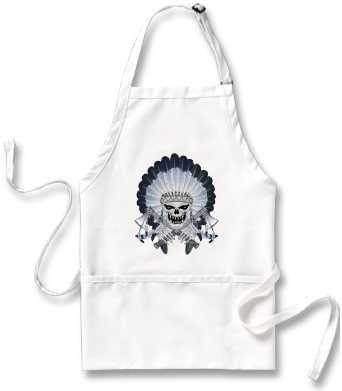 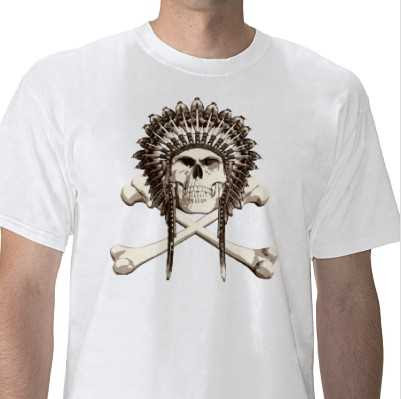 It's telling that Zazzle classifies its clothing as follows:

Seeing all the images together confirms the interpretation I floated in T-Shirt Shows Skull in Headdress. Allow me to elucidate.

These shirts don't show simple skulls in headdresses. They show a skull and crossbones. Or a skull with crossed tomahawks. The skulls are drawn to emphasize their glaring eyes.

In short, these skulls aren't neutral, they're evil. They represent the ruthless Indian savage to the nth degree. It's the Indian as supernatural specter, avenging spirit, demonic force, harbinger of death, the Grim Reaper.

It goes without saying that the Plains-style headdresses are stereotypical. See Why Hipster Headdresses Aren't Okay and What's So Wrong About Kesha? for more on the subject. But that's only one problem.

These skull images show a confluence of beliefs--all negative:

1) The Indian as a savage, warlike, scalping cannibal. I.e., the ultimate destroyer of bodies and souls.

2) The Indian as a supernatural being who controls black magic. I.e., Death as the ultimate Indian curse.

This is why Zazzle has classified Indians along with creatures in the fantasy category. To Zazzle and its customers, Indians are like werewolves, vampires, and other monsters: ghoulish apparitions from the dark side.

3) The dead Indian. I don't think the shirts suggest pleasure at the thought of dead Indians, as James Branum said. But they do suggest the concept of dead Indians. "Indians no longer exist, so it's okay to use their images. In fact, their extinction is the perfect metaphor for Death, which is cool."

4) The Indian as mascot. "We conquered and killed you, so you're ours now. We can do whatever we want with you and your culture."

5) The Indian as hip fashion accessory. "This bitchin' shirt will upset my parents and all the other squares. Not only does it have the Grim Reaper on it, but an Indian Grim Reaper. In your face, straights! Death as a dead Indian chief! Political incorrectness rules!"

Needless to say, I still don't buy the "honor our heritage" argument offered by War Paint Clothing's owners. These shirts aren't meant for Indians only. And they aren't meant to acknowledge the breadth of Indian history and culture. What they're meant to be is a dark, twisted version of the standard cultural appropriation. If an Indian mascot is cool, a dead Indian mascot is even cooler.

If you're not convinced yet, do the standard test of replacing the Indian with another minority. How about an African skeleton with a grass skirt, shield, and spear? Or a Jewish skull with a yarmulke and Star of David? Do these images work? No.

Why not? One, because we don't deem blacks or Jews to be purveyors of savage death. In our society, that role is filled by Indians, predatory beasts, and supernatural forces. Two, because people would denounce the idea of parading black or Jewish skulls on t-shirts. In our society, only Indians are routinely thought of as dead and gone.

Now's a good time to remind ourselves of the harm of seemingly "harmless" stereotypes. Recall the following postings:

Why do Native kids frequently hear that they're savages or that they no longer exist? Because of countless stereotypes in our culture, including the ones on these shirts.

Any of the reasons I've listed are enough to condemn the skull images. Together I'd say they're overwhelming. The shirts promote the stereotypical view that Indians are savage, supernatural, and dead. Wrong, wrong, and wrong.

Below:  Evil live Indians are cool... 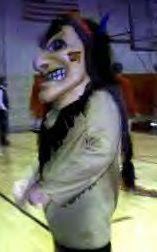 ...and evil dead Indians are cooler. 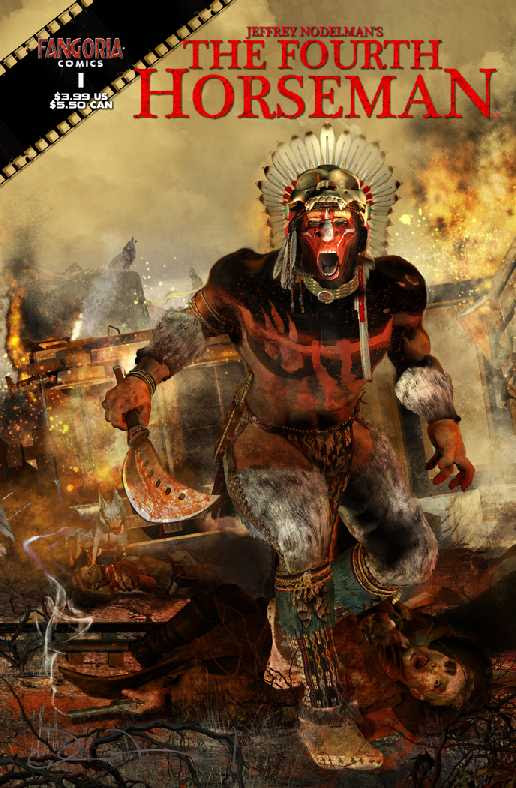 Kill America, Save its Soul said...

It is hard to break tradition. And the American iconology of the headdress is already a staple of American society. Like the naming of the Jeep Cherokee or the Washington Redskins, the use and exploitation of indigenous culture has and remains to be a symbol of "control" by the dominant society.

It is legalized ignorance and there are no bounds to the use and misuse of Indian culture until tribes band together and demand payment for such use, but they don't and they won't because tribes are diverse politically as they are culturally and there will always be one tribe or native to sell out!

As for the death and skull combination, it can be read many ways. As the death of or to Indians, which has already been used by the silent wooden Indian statues across the country.

That "Fourth Horseman" is interesting. What's with associating Indians with death? Why not associate non-Indians with pestilence? Makes more sense.