Also problematical is the nature of the tragic, doomed romance. It's a miniature version of the standard "vanishing" myth: that the "noble savages" were destined to die out.

The radio hosts should think twice about playing Running Bear--even if an Indian requested it. I'd say its time has come and gone. If people want to hear it, they can buy the CD.

Meanwhile, it's not clear what the hosts said, if anything. Whooping and making fun of Indians obviously would be wrong. But if they were simply hooting and laughing at the song's silliness, that wouldn't be wrong. We can't draw any conclusions without more information.

For more on the subject, see Dean Martin's Not Enough Indians and Indians in Pop Music. 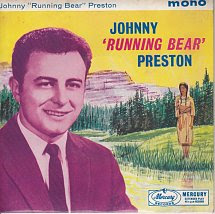 Email ThisBlogThis!Share to TwitterShare to FacebookShare to Pinterest
Labels: music, protests, Stereotype of the Month, stereotypes