Michelle R. Shining Elk posted a defense of Saginaw Grant's role in the Cowboys & Findians episode of The Dudesons in America. She tagged me in her essay, so she wanted me to see it. I don't know if that's because I criticized the Dudesons or because I mildly rebuked Grant.

She went on about how horrible people were to criticize a respected tribal elder. (I don't belong to his tribe or his people, and I'll dare anything to end racism and stereotyping.) And how horrible they were to post comments on the Internet without contacting him first. (Because contacting a professional actor and getting a personal response is usually so easy.) But she said one thing that deserves a fuller response:

Michelle R. Shining Elk: YOU CAN'T UNDING A BELL...THE DAMAGE HAS BEEN DONE. THE DISRESPECT TO ELDER SAGINAW GRANT--TACTICS USED, DEPLORABLE.Comment:  In other words, stop picking on poor Saginaw because he gave the Dudesons credibility and cover for their racist antics? Don't you wish.

Really, it's a cop-out to protest racism and stereotyping in the media? So we shouldn't do it? We should just let it happen and trust America's parents to cover their children's eyes and ears?

A typical MTV show has 2-3 million viewers. Let's say a million of those are children. Rather than criticizing MTV (and Grant), Shining Elk believes a million parents should've set aside an hour to watch the Dudesons with their children. When the stereotyping became evident, they should've turned off the TV.

A small number of parents (perhaps 10, 20, or 50) could persuade MTV to change its programming. That's more efficient than hoping a million overworked and exhausted parents will act. Fact is, they won't act, so pretending they will is the cop-out. It's a dodge to excuse Grant, Shining Elk, and anyone else who won't fight the problem.

Parents should screen everything?

But wait...that's only a small part of the problem. Studies show children spend something like six hours a day in front of the TV or computer. They're watching movies and TV shows, playing video games, and browsing websites. Any of these activities may expose them to negative stereotypes.

Something like 40 million American families have children at home. In these households, Shining Elk must expect the parents or guardians to set aside six hours a day to monitor the kids' activities. Because you never know when a Native stereotype will pop up on the screen. After all, who would've expected Finnish stuntmen to start pretending to be Indians?

Got that, parents? You may be overworked and stressed out now, but Shining Elk wants you to find another six hours a day to protect your kids from stereotypes. It's your responsibility, so quit complaining and do it. You don't need to work eight hours and sleep eight hours a day, do you? Get a part-time job, take stimulants to stay awake, but don't let your children see stereotypes.

Or you could take away their TVs and computers...forbid them to visit friends with TVs and computers...and keep them shut in at home. That would help them avoid the thousands of logos and products featuring stereotypical Indians. I don't know what these kids would do with their time, but maybe you could coax them to read.

But then the same problem arises, darn it. You'd have to pre-read their books for them to make sure they don't contain stereotypes. If a child spent 4-6 hours reading each book, you'd have to spend 4-6 hours screening it first.

Rather than this endless screening, perhaps Shining Elk expects parents to educate their children about Native stereotypes. That way, the children can avoid stereotypes on their own, without adult supervision.

Good idea...but it took me something like 10 years of reading books, newspapers, and websites to become reasonably well-informed about Indians. Does Shining Elk think parents will undertake the equivalent of a college degree in American Indian Studies to protect their children? If so, she's dreaming.

Blaming parents is the cop-out

You see how ridiculous this do-it-yourself approach is? Of course parents should try to monitor their kids' activities and protect them from the worst matter, but it's impossible to screen everything a child sees. It's stupid and illogical--a cop-out--to offer this as a "solution" to the problem.

The real solutions are the ones I've advocated all along. Tell the racists and stereotypers that what they're doing is wrong, and why. Inform them about the realities of Native culture and history. Educate the public about the same things. Encourage people to think critically rather than swallow what they see and hear in the media.

That's what we're doing by criticizing MTV, the Dudesons, and Grant for perpetuating Native stereotypes. Shining Elk can crusade for parents to regulate their children's lives while activists crusade for MTV et al. to stop the stereotyping. I'm confident that our approach will produce better results than hers will.

For more on the subject, see Saginaw Grant in The Dudesons and Natives Protest The Dudesons. For why it's important to protest stereotypes, see The Harm of Native Stereotyping:  Facts and Evidence. For a similar debate about parents vs. the media, see Highlights of the FTC Report on Media Violence. 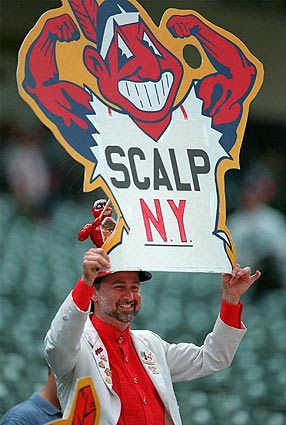 It's a total cop out and disappointing the so many hang around the forts came to her defense.

I'm tired of the excuses that Native Actors should be given a pass to sell out because there are so few roles for them.

They made the decision to be an actor, they make the decision to honor Native filmmaking and acting or not to. When did the point of being a Native actor to dispel stereotypes turn to defending and supporting the racist portrayals of our people?

There is no respect in doing a beer commercial. I don't care how far away the beer is from you and if you are not speaking or near the product as Michelle mentioned.

Yet we are supposed to respect him simply because he is an elder?

What happened to accountability?

Sadly my children will not be looking up to Saginaw, he makes no apologies for the beer commercial or the MTV Episode. How much further is the envelope going to be pushed the next time around?

What a crock! Is this the same generation of elders that signed off lands for cash and reaped said compensation while the generations to come have lost this birthright?

Is this the same generation of elders that helped Hollywood continue the portrayals and stereotypes of Natives that college kids dress up for drown nights and drug use?

Is this the same elderly Natives that we are supposed to respect and honor when they lived during a time in America when it was acceptable to beat their wives and kids; drink themselves to death and passing on such legacy; salute a flag that spits at them and cowar to non-natives while attacking their own people?

Is this the respect and honor you want given to this sell-out and clown of a dying prune?

The sooner this generation of apples die out, there will be no more apple pie for poison!

So Michelle's job is now PR clean up for the sell - outs?

No surprise there, keep supporting and backing the actions of those that dont walk their talk.


Your actions speak for themselves.

Smart people don't watch these shows. Ignorant people watch them, and it reinforces their ignorance so then they harm Natives and other people of color.

And standing by while it happens says we don't mind if we get treated like crap. Not a good strategy. There were always slaves who sold out the others if it meant material advantages for themselves. There have always been those who just want to "get theirs" even if it harms their own people.

It's slave mentality, hang around the fort mentality, that leads people to look the other way or, worse, let themselves be used as tokens. Maybe those who sell out their people deserve our pity. But they don't deserve our support.

As far as "few roles for Natives". Yes, it's hard to be a POC in Hollywood. But it's hard for ANYONE to survive as an entertainer. 90% unemployment, no matter your race or gender. But truly talented people get cast in roles that weren't written for any particular ethnicity. The better actors are making a living, but it's a hard profession for those with ethics. The most ethical actors find a good career in addition to performing, so they don't have to take racist roles out of desperation.

The stereotypes are bad. I mean, we can't expect parents to screen everything. (That said, it'd be nice if parents took their kid to a swim class or a sports team or a karate class or just some time at the library instead of endless TV.)

Out of all that Michelle SE wrote, you picked one small true comment about parents paying attention to what their children watch on TV, and you argue with it for paragraph after paragraph as though it was a public threat to commit murder.

You didn't argue with her main point which was treating an elder disrespectfully, publicly excoriating him, posting letters, personal attacks and rebuttals without ever having even one conversation with the man.

I would have to agree with Michelle's point.

She wasn't defending the show or the content. She was decrying how poorly a respected elder was treated.

Saginaw Grant is a man who has over many years of steady, selfless, positive role modeling, hard work and personal contributions earned a tremendous amount of valid respect.

From what I have seen, he is very accessible through his Facebook page, or in person at any of the many powwows he attends and is invited to dance in. Hardly an untouchable or unreachable Hollywood type.

From what you have written about this so far, it seems as though you haven't approached Saginaw to speak to him about any of this either, and yet you are still blogging away, bashing him without ever speaking to him. Kind of embarrassing "journalism." Maybe take the word "newspaper" out of your title if this is merely personal, biased, unbalanced opinion.

Apologies to Saginaw are in order all around.

That is right...it is time to call the authorities who sendinf Saginaw Grant death threats!!!!Investigating NOW!!!!