Natives have reacted swiftly and angrily to the blatant stereotyping in the Cowboys & Findians episode of The Dudesons in America.

By Jennifer Yuhas GallIn Response to THE NEW MTV SHOW... Cowboys & Findians... With an Elder I once respected.... I bow my head in sorrow...Of Vine Deloria & Native Portrayals in Media (for Nov. 2010)

By John GoffComment:  I'm not sure this episode first aired this month. And only one episode mocks Indians, not the whole series.

We're waiting for the first person to defend or justify a black counterpart to this episode. Suppose the Dudesons did the same kind of stunts dressed in blackface, grass skirts, and bones and claiming they were auditioning for a primitive African tribe. Would the so-called "jokes" still be satirical, ironic, or funny?

It's difficult to find images of stereotypical African tribesmen online. I presume that's because people realize these images are racist and don't want to be associated with them. Yet you can find countless images of "primitive" Indians from the same era. Why is one racist stereotype acceptable but not the other?

Gall's point in the second posting is a key one: "As long as the 'stereotypical Indian' is portrayed on the screen, in print, or any other form of media, the general and largely uninformed public will, on some level, believe those stereotypes to be true." Yes. Again, seeing is believing.

This is especially true when a real Indian (Saginaw Grant) talks as if all Indians belong to one tribe and he's their chief. This was a clever attempt to inoculate the episode from criticism, but you have to ask why the Dudesons did it? Why bring in a real Indian if they intended the episode to be a joke? Why not get an Obama lookalike, a Japanese guy, or a blond girl--someone no one would think was an Indian--to make the "joke" unmistakable?

There's zero evidence that most Americans--particularly children--know what Indians are really like and can see through the alleged spoof. This is simply a rationalization for racism: people excusing their own desire to feel superior by mocking and belittling others. When you press those who utter such ridiculous claims, their ignorance inevitably emerges. "Well, Indians really did wear feathers, paddle canoes, ride horses, etc., so what's the problem?"

AIM Santa Barbara notes that MTV has taken down the video for this episode (The Dudesons in America #2). It could be a response to the protests, although the video for episode #1 is unavailable also. Whatever the reason, I suggest we continue the protests until MTV backs down.

Below:  Something to spoof on the next episode of The Dudesons? 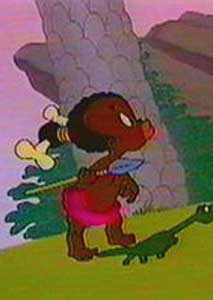 Rob says: "We know millions of people believe indians are nothing but a mishmash of stereotypes:"

Is there any shred of evidence that such "millions of people" believe in this? I doubt it, the average American who tunes in doesn't necessarily support the notion that they actually believe in racial stereotypes. They already know this is a spoof of some sort, not the genuine part. But yeah sensational journalism can be a polite form of ignorance.

Actually GENO, Rob is right! In America alone, there is a shared ignorance and revival of old west racism due to the "gaming" and mascot issue. Personally, I think racism against natives has always been here, it just resurfaced with a new generation of ignorance.

Many of the media savy people are from the flower power generation who wore beads and wanted to live in teepees during the sixties.

Rob is correct in using "millions" because I have been overseas and have firsthand experience of how other countries view American Indians. Americans are not the only nation to have viewed this stupidity and racists affirmation of American belief systems.

The American media and public at large have done a phenomenal job in stripping away indigenous culture to the point that identity can be an issue for many Indians.

Why? Because I believe this nation does not want to accept the fact that civilizations existed long before America was a word and that any and all cultures must melt away any original identities to become a part of the great "melting pot".

Kill the Indian (culture and identity) to save the man (taxpayer and soldier).

The American Indian cannot and will not claim or be a part of the bastard culture, that is for those whom do not claim any roots to their forefathers traditions. And I am not talking about traditions less than 300 years old.

If you don't like it, don't watch it. Let the majority of the nation enjoy the show.

If you don't like my criticism, Anonymous, leave. No one's forcing you to read it.

There's no hard polling data about what Americans believe, Geno, if that's what you mean. But I've been compiling anecdotal evidence about what they believe for more than a decade. I'm confident that my reading of the evidence is as good as anyone's.

For more on the subject, see Idiot's Guide for Dudesons Defenders and Children and Dudesons Believe Stereotypes.