We also know Arizonans don't care about the "rule of law." If they did, they could impose stiff penalties for harmful derivative sales, power-plant pollution, and Indian artifact theft. They could demand inquiries into the "friendly fire" that killed Arizona resident Pat Tillman. But they don't do any of these things because they'd harm rich white people, not poor brown people.

The indigenous philosophy of "we're all related" contrasts with the Euro-American philosophy of rugged individualism, survival of the fittest, "looking out for no. 1," "the winner takes it all," "nice guys finish last," etc. Stamping out the indigenous viewpoint meant stamping out Indians and Latinos. We couldn't let these people question America's God-given right to dominate the continent and world, could we?

It all goes back to the Euro-Americans' desire to maintain their white privilege. When you come from two millennia of divine rulers and absolute monarchs, you don't think about giving up power to the hired help. You're the captains of industry and they're the slaves, peons, and laborers.

For more on the subject, see Send Minorities "Back Where They Came From"? and Conservative Worldview = Fear of Cooties. 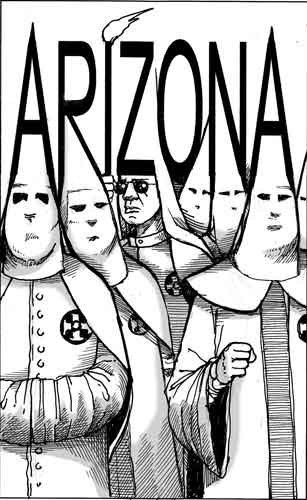