A group of Natives challenges Tinsel Korey's identity on MySpace:

Below:  An image from the 'Harsha Patel" Tumblr page. 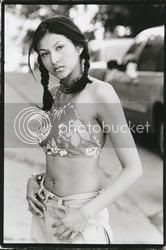 so whats the big deal if she is or isn't native american...
First nation people should feel some pride that Korey identifies as first nation.

My base line is Korey...you rock girl .. keep giving it heaps wahine ma.

You can't just pretend to be Native, take jobs from real Natives. Wake up, Harsha. You're not honoring, you're stealing.

Tinsel's husband claims that she has shown paperwork to prove her heritage to one of the moderators of the site www.twifans.com. Has anyone looked into that? Asked the moderator how it came up and what she saw?

I've been skeptical of her for a long time but it does seem a bit like "piling on" when all the research goes into proving she's not First Nations and NONE goes into the possibility that she is what she says.

You make an excellent argument for truth here. I completely agree that it's important for so many reasons. But are the truth-seekers only looking for truth where they WANT to find it?

Tinsel's husband? 3yrs ago she had no proof and admits she has doubts of her ethnicity then marries a high profile native man and has proof?
higly suspect. If you are not native you might not understand why it's a big deal. Let's talk about not the role but the fact that she is a jingle dancer and goes to ceremonies. Is it still okay to lie then?

I am a born and raised reservation girl brought up by my grand parents, parents, and many aunts and uncles from my tribe. My culture and our traditions were instilled upon me all of my life from a very young age. I love who I am and where I come from, including the times that were really tough. I take being an Indian and the experiences and teachings I gained from growing up on the rez seriously. Who we are and where we come from as bona fide Indian people (American Indian for clarification purposes) is not for sale or to be taken because it's the newest, latest, greatest "jump on the band wagon" thing, or because it will get you a role or part in a movie.

I work, tirelessly, every single day to try and get our Indian people in film and television roles in both traditional roles and non-descript roles. Every single day -- and I do it because it is from my heart and I want our younger generations to see us in our traditional roles and in roles as doctors, lawyers, and business people. I have submitted countless real Indians for parts in all of the Twilight movies to date, as well as countless other movies. When we, the legitimate Indians lose out on a role because someone of another ethnic background is cast, it is like a 100 million steps backwards in time. So very, very frustrating. And when it happens, I find myself saying "really? really? of all of our beautiful talented Indian people in this country, you couldn't find one to fill the role, you had to undercut us by hiring an "other?" I often spend countless hours to help get an Indian actor who isn’t a client get cast in a role because it is far more important to me to see our Indian people work and get the role then it is about getting paid or being connected to that person. It’s important to me that our Indian people get cast so that if there is a chance to give advice or to consult on cultural or traditional issues on a production, a legitimate Indian is there to contribute. It is important to me, that our people see…our people on screen.

I went through all of this with Rudy Youngblood. At the end of the day, I still proclaim to him "just be who you are, and stop trying to be who you aren't." Rudy felt he didn't have to explain or prove his background, especially his tribal affiliations to anyone, but I begged to differ -- you do have to. And I say this to all the people out there who aren't Indian but have taken over the identity, our culture and our ways because it is the "in" thing to do. You do have to prove your tribal affiliation...our of respect for those who have come before us and made sacrifices for our people, our elders who are still with us, and to those of us who are bona fide American Indians who have lived our lives as such.

I feel the same way about non-Indians who marry Indians...nothing frustrates me more than a non-Indian who thinks via a marriage certificate that now they are Indian and it's all good to start saying they are also an Indian and then starts donning the leather, feathers, turquoise, give themselves their own Indian name, and some go so far as to enter the dance circle without respecting the proper ceremonial protocol before they do.

I was Indian when it wasn't cool to be Indian and dealt with discrimination and harassment because I am Indian and I have, and always will, take the bad and the good that comes with my being an Indian. I am Indian 24/7 every single day of the year.

I've written about the problem of non-Natives playing Natives several dozen times in this blog. Keep reading if you somehow missed those postings.

I'm not actively "looking" for information on Korey. I just post what I come across in the course of my browsing.

If you have evidence that Korey is Native, e-mail it to me. Don't wait for me to find it; find it yourself.

Thanks for your thoughts, Michelle. I agree with you, even though I'm white 24/7.

For more on the subject, see Mackenzie Confirms Korey's Identity.