In Protesting Stereotypes = Cop-Out? I addressed part of Michelle Shining Elk's defense of Saginaw Grant in The Dudesons. Someone posted the following comment:My response:

Michelle's comment wasn't true, it was false or misleading. As I explained in the previous posting.

Apparently you missed the ugly intent of her comments. She implied that activists are wasting time, ignoring "real" problems, and promoting themselves at the expense of others. That's an insult to all the people who have dedicated their lives to fighting for truth and justice.

I could've spent the same amount of time ripping each of Michelle's paragraphs to shreds. But that would've taken days, and she would've ended up looking like a blithering idiot. So I resisted the impulse.

Michelle's "main point" was a side issue. She dodged everyone else's main point: that Saginaw Grant never should've participated in a show that was a gross insult to Indians. When she addresses this point in detail, I'll respond to her position in detail.

Michelle is Saginaw Grant's publicist, so we can assume she spoke for him. Grant himself spoke in a radio interview and in a posted statement. Like Michelle, he ducked the actual issues and instead attacked those who dared to criticize him.

Indeed, he suggested his critics weren't Native enough to criticize a real Indian like him. So what do you think he'd say to a non-Native like me? I don't know, but I can guess. In any case, it's not worth the trouble to find out.

FYI, newspapers publish opinion pieces as well as straight journalism, genius. So no, I'm not going to change the blog's name. When you understand how newspapers work, you'll see that the name fits perfectly.

Grant isn't the offended party in this case. Rather, he's the one who offended others. After he apologizes to everyone he's offended, I'll think about whether I should apologize to him. Not before.

If he doesn't like my opinions, he can contact me and explain himself. I'm as easy to reach as he is, if not much easier. And unlike him, I don't hide or run away from my critics.

P.S. You say you want more criticism of Saginaw Grant and The Dudesons? Okay, here you go: 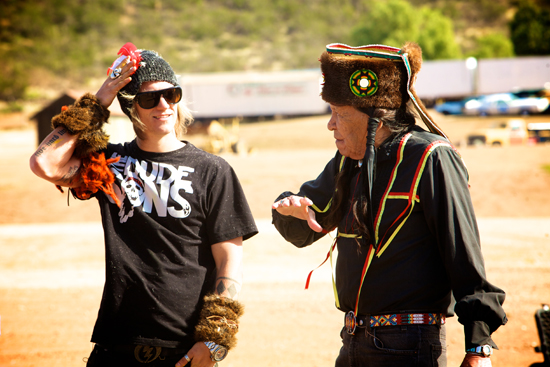 Everyone is missing the point here. As a full blooded native raised in a traditional setting, I too was always taught to respect elderly people, even non-natives, but as an educator and an army veteran that served overseas, native people still face resistance from all sides.

Grants participation only continues and encourages the ignorance and lack of respect the dominant culture expresses towards Americas first people not only on TV, but in legislation, schools, sports, churches, the communities across America in general and mainly, with our young people, whom need more positive role models and serious identity figures, not cartoonish caricatures that deny a people equal and realistic representation.

If the Dudesons had a cast completely made up of nothing but native actors and participants, there might be cause to laugh, but watching these episodes clearly only targets one group to entertain in my opinion, and thats college level frat boys watching this show encouraged to get drunk and exchange native headdresses.

Shame on MTV and Grant!