While writing ICT's Take on The Dudesons, Vincent Schilling asked me what I thought about the controversy. We exchanged the following questions and answers:

How do you feel about the episode?

I thought the episode was a travesty--one of the worst cases of stereotyping I've seen in years. And I don't cut the show any slack because it supposedly was a comedy or satire. The Dudesons "spoofed" Indians the same way minstrel shows "spoofed" African Americans.

A lot of people seem to have criticized Saginaw for his appearance. Comments have ranged from "MTV is notorious for not revealing the script and surprising people" to the other spectrum. What is your stance Rob?

I usually don't blame actors for taking jobs and furthering their careers. The majority of the blame rightly belongs to the producers and creators. But in this case, the offense was large and (I believe) Grant's pay was small. I would've expected him to say or do something. Even if he signed a contract and the Dudesons surprised him, he could've balked or protested. At some point, your principles have to kick in.

AIM succeeded in having MTV pull the episode--some folks fear MTV may now see a "red flag" in hiring Native people from this point forward in any aspect? Did this hurt or help Indian Country?

The argument that acting too "uppity" will hurt Indians seems ridiculous to me. Is there a documented case of protests causing a hiring backlash against the people protesting? Did the Civil Rights movement cause a backlash against blacks? Or did it force companies to begin changing their policies and hiring the people they'd excluded? The latter, I think.

I think the protest helped Indian country by showing Hollywood that Indians aren't going to take this kind of insulting, offensive treatment anymore. If studios want to avoid future protests, boycotts, and lawsuits, they'd be wise to play ball. This isn't only the right thing to do, it's smart business. Movies such as My Big Fat Greek Wedding and Slumdog Millionaire have proved that audiences will flock to see good "ethnic" stories.

How do you feel about MTV and the network pulling the episode?

I think MTV's pulling the episode was a great symbolic victory. I'm impressed by the time and energy AIM and other activists put into this battle. But I'd remind people not to miss the forest for the trees. Stereotyping of this magnitude occurs every day. In addition to the usual Indian mascots and wannabes, we have Mayor Bloomberg issuing cowboy threats against the Seneca Nation. We have young hipsters imitating respected Indian chiefs. We have non-Natives playing Natives in movies such as Twilight and The Last Airbender. All these problems deserve our attention. 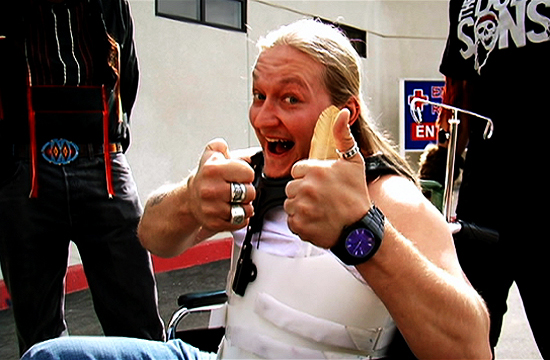 Great article Rob, and your right, we can lose sight of all the other trees

Well, I hope Saginaw has more jobs coming his way and that Native American actors will not have their prospects impacted negatively.

Really the Dudesons episode was so extreme the concern the protest could hurt careers is at least mildly exaggerated.

This is not to say there's no opportunity for me and Rob to but heads (I think it's shitty to damn an actor's choice to be professional in the circumstance of a bad script - Flavor Flav in response to a racist 'roast' said "Hey, I'm getting PAID!" and he has a point.)