On Facebook someone asked people which they preferred: Star Trek or Star Wars? My response: Only a tribble-hating Klingon would say Star Wars!

I then posted the following on my Facebook wall: 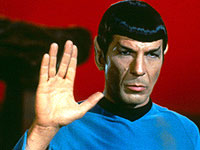 This led to the following discussion with Michael Cooke:True, the original Trek did have a lot of race and gender problems. But that was a function of the era, not the show.

Let's recall that there were four series (five if you count the cartoons) and a bunch of movies after the original series. Collectively they determined the nature of the Trek universe. And that universe is no better or worse than any typical fantasy universe.

I don't recall any great moments of racial or sexual politics in the Star Wars mythology. And the point of this posting was to compare the two universes. How do you figure Star Wars is better than Star Trek in this regard, Mike?

Data's brief foray into sex was kind of silly. That happened during TNG's first season, when a lot of silly things occurred.I didn't say the original Trek wasn't racist. Like every other show of that era, it was.

What I said was that the subsequent series and movies addressed the problems. They made Trek 1) no worse than the typical fantasy universe and 2) better than Star Wars in that regard.

True, Star Wars wins on political realism. But Star Trek wins on cultural and biological realism. Every alien race and world in Star Wars is constructed of cardboard. They may look alien, but they have no substance whatsoever.

Some better than none

When you say Star Wars has more political realism, you're basically dodging my point, Mike. Let's try again: How do you figure Star Wars is better than Star Trek in terms of racial or sexual issues?

Incidentally, I've criticized Trek at length in postings such as these:

So try to avoid your usual tactic of assuming you know what I believe. Okay?

Star Trek kept its tradition of projecting into the future the prejudices of today...exactly as Star Wars did.

I did call them fantasy universes, not SF universes...right?

My TiVo has recorded all the new shows on network TV. I don't think I've seen any gay characters yet. In 2010, homosexuality is still the love that dare not speak its name.

Trek writers = morons?Data didn't spring out of thin air, even in his fictional universe. A heterosexual scientist presumably created and programmed him. One could speculate that the scientist incorporated his sexual bias into the programming.

Star Wars is a war story...so every aspect of it that isn't political or military is one-dimensional cardboard. Didn't I say that already?

Captain Janeway, Major Kira, T'Pol, and Dr. Crusher are among the female Trek characters who are deeper than Princess Leia.Given the uneven quality of TNG, a lot of episodes probably were written by morons. <g> I suspect you or I could've done better.

But the real problem was the producers. Here, read about LGBT in Star Trek:

Anyway, you're putting a lot of emphasis on Data's one sexual encounter. It was a few minutes out of 178 hours in one series out of six. I'm judging the whole when I say Star Trek is better than Star Wars overall.

Okay, let's have fun with this:

1) "Spock's gay! LOL" Actually, ponn farr demands bisexuality. What are you going to do? But Star Trek coined "slash" fiction. As in Kirk slash Spock. Has since gone on to include Anakin slash Obi-Wan, Sam slash Dean, Aragorn slash Legolas, etc.

2) Great moments of racial and sexual politics in the Star Wars mythology? Err, slave girl kills her master with the very chain he used to enslave her? The general agreement is that black and white team up against blue and green in the Star Wars universe.

3) "Biological realism"? Yeah, that's why all the aliens look human.

4) Seriously, neither strike me as science fiction in the traditional sense. Even when V'ger drops random physics terms that don't make sense, no, just no.

If Star Trek was created just to appease your individual taste and limited creative thought processes, you hit the nail on the head.

Technically speaking though, Gene Roddenberrys' concept of a shootout at the OK Corral in space mixed with a historic "interracial kiss" on primetime TV and a multiracial casts, far exceeds the Star Wars saga and the animated alien characters children love with Lucasfilms.

Forget all the homophobic rant and trying to define Vulcan sexuality, or lack thereof, even the new Star Trek film clearly represents Spocks attraction to earth women, and I was not impressed with the new release altogether. Combine that with the scene in, "In Search of Spock", the Vulcan experiences ponn farr with a female Vulcan. Perhaps it is you that is aroused by the Chief Science Officer?

Star Wars lost me after the aliens became to "silly" and cartoonish, but I did like the redux productions, the villians and the storyline.

Star Trek actually has an episode from the 1960s that involves natives and I saw a photo of Leonard Nimoy (Spock) dressed as a native somewhere.

Well, in a way this is akin to arguing if Superman or Hulk would win a fight. Stupid argument.

But if you're interested in comparing argument styles, it's instructive how desperate a person can be to 'prove' even a silly position.

I harp on Data because that once the show had no out - they had to raise homosexuality to just make sense! And for me, it is internal logic that is the basis for my heartfelt nit picking of TV and movies.

I'm just saying. Biological realism isn't "all sapient species are human", any more than it is "all animals are dogs" in cartoons. There was also the unfortunate implications of the Vulcan veganopia. Not so bad, until you're familiar with the reality behind veganism: See Watson, Paul. Now, an interesting episode would've had a debate in one of those time travel episodes over whether the devil you know is really better than the one you don't. Finally, the aliens were all steroetypes; the Vulcans were always logical, the Klingons (as of TNG) were all warriors, and TNG went farther: The Ferengi are all corrupt executives, the Borg are all an Instrumentality, etc.

Perhaps it's because I'm younger; I know that the Kirk/Uhura kiss was a big deal, but it doesn't seem like one now. And for my generation, well, we have Riker and the androgynous aliens. Intended to be an Aesop about same-sex sexuality, and Frakes himself wanted to be paired with an alien played by a man for this episode, but instead it looks like a bunch of psycho lesbians.

I have noticed that Star Trek fans inevitably start these Trek vs. Wars debates. And God forbid you like both. Why, next, you might like both anime in Japanese and dubs by 4kids!

"Biological realism" means some Star Trek species have physical traits that go beyond mere appearances, Anonymous. For instance, Vulcans, the Borg, Trills, the Gorn, the Horta, Odo, and the creatures of BEM's world. And Trek tried to explain why there were so many humanoid races and why the chief races could interbreed.

That may not be much, but it's more than Star Wars gave us. If its aliens offered anything except strange appearances, I must've missed it.

I don't consider freeing yourself from slavery an example of racial or sexual politics. Not unless you explicitly make the point that the slave system is racist or sexist.

I don't think there's ever been a case of same-sex pon farr in the canon, so I don't know what your "bisexuality" refers to.

You don't seem any more desperate than usual to prove yourself, Mike. Although you did devote an inordinate amount of time to Data's brief foray into sexuality, as I said.

I just asked the questions, Anonymous. I wouldn't have debated the issue except Mike started picking on Star Trek. Then I took the time to correct his false or misleading statements.