By Lindsay GellmanComment:   This article is three weeks old and refers to the NY Post article, which I thought was about MTV Canada only. But the video and photos seem to be gone from MTV's main Dudesons site.

Assuming the Dudesons episode is gone for good, what have we learned? Well, despite Michael Cooke's whiny defense of racism, we see once again that protests work. Activists got rid of one set of stereotypes at a major network. More important, they showed Hollywood there's a price to pay for stereotyping Indians. Anyone who knows about this incident will think twice before doing something similar.

For more on the subject, see Dudesons Controversy in NY Post and AIM Threatens to Sue MTV. 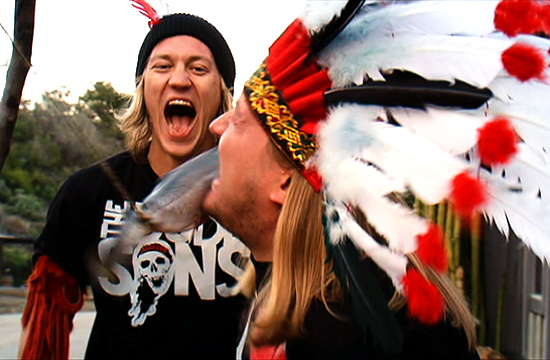 I think those 2 guffawing Goldilocks in the picture would be better off stereotyping horned helmeted Vikings wearing metal bras & eating smoked herring.Ugh!

Glad I got mine from iTunes when I did. Now I have the "banned" episode. I feel cool, like those guys that have first generation VHS recordings of the Star Wars Holiday Special.