Native Americans are on coins; why not logos?

By Charles E. BalleineComment: This is a superficially plausible argument, but it falls apart when you think about it. Here's why:

1) US coins, like monuments and murals, are meant to honor people of the past. In fact, a law says no living people may appear on our currency.

Coins put Indians in the same category as US presidents and statesmen. They recognize Indians as leaders and visionaries. There's (usually) no implied message that Indians are "savages" or warriors today.

In contrast, sports logos exist precisely to link today's teams with yesterday's Indians. The message of a typical logo is:2) Look at the Indians we've actually honored on our coins. The female figure of Liberty in a headdress. The dignified Indian on the buffalo nickel. And Sacagawea the girl guide.

Only the buffalo nickel's Indian remotely resembles a warrior...but he isn't one. He doesn't carry weapons and there's nothing to suggest he's warlike or savage. For all we know, he might be history's greatest diplomat and peacemaker, not a fighter or a killer.

Balleine specifically points to the $1 coin as a model for a sports logo. Really, that's your argument? Okay, put Sacagawea on your logo. Rename your team the Girl Guides. Eliminate all your brave, noble euphemisms for savagery and tout your football team's feminine side instead. Then you can use a logo like the $1 coin.

Indians still would protest being used in this way, but I don't think they'd protest as vociferously. That's because the main thing they're protesting is being portrayed as one-dimensional warriors of the past. The Sacagawea coin contradicts this stereotype while the typical sports logo reinforces it.

For more on the subject, see my previous postings on US currency.

Below:  Which ones are the savage warriors? (This may be a tough challenge for someone like Balleine.) 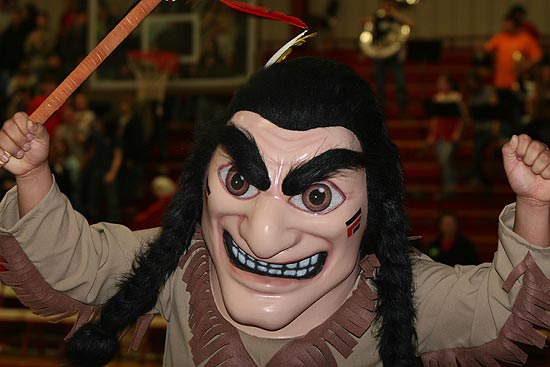