Below:  "Gareth Hughes became a star of stage and screen in America." 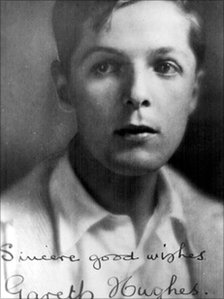