Native American Baby Names:  The WarningIn "American Indian" Names That Don't Have The Meaning They're Supposed To, the site explains when to suspect a phony name:This page goes through several names and explains why they're phony. Some examples:Comment:  For a discussion of a probably phony name, see Indian Maiden in PISTOLFIST. For more on the subject, see The Most Common Indian Names and Funny Indian Names.

Below:  People buy cute, romantic, whitewashed dolls for the same reason they bestow names such as Aiyana or Tala. I.e., because they're exotic but not too strange or "foreign." 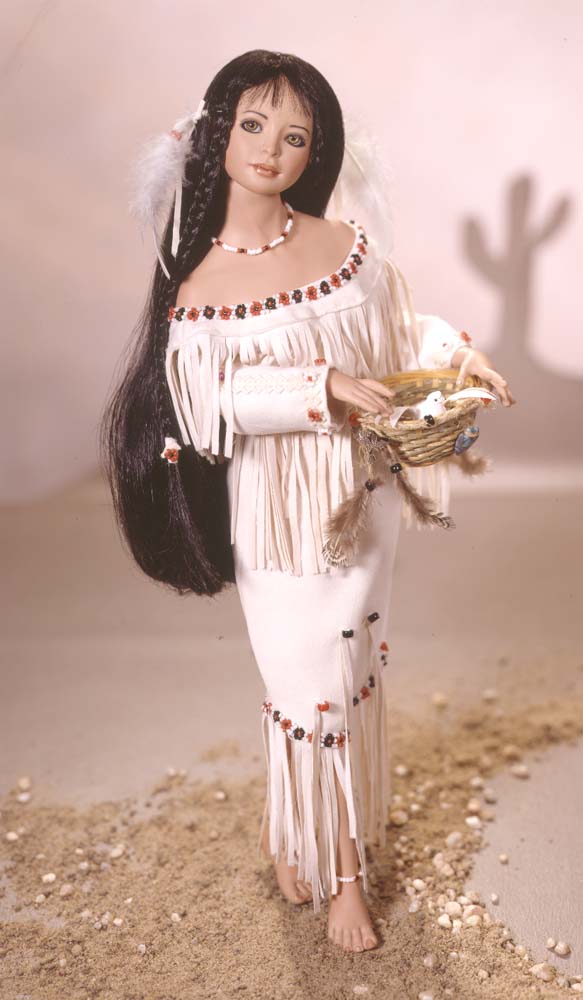 I never understood these so-called "Indian names". All the nations I've lived around, our names come ceremonial rights of passage (dreams, etc) or they're given to us from a community elder for one reason or another. Rarely are our traditional names simplified like names from across the oceans. In my situation, I was named by a community elder from the Blackfeet Nation (Southern Piegan of Montana) even though I'm Anishinaabe-nini. The elder had two reasons for giving me then name, which was traditional name one of his elders in the Browning, MT area during his childhood on Blackfeet Rez. Reason #1, me and my elder's elder have/had the exact same government first name. Reason #2, me and the older elder were both known to always be dancing around. A naming ceremony was held, in which I was officially given the name... in the language of the Southern Piegan people. I kept the name as it was a huge honor, being we Anishinaabeg and the Blackfeet people have been traditional enemies since before Europeans illegally immigrated over here. For years, I couldn't find anyone who would translate the name into Anishinaabemowin for me until recently. My experience isn't the most common of naming instances,either. In my experiences from listening to elders from different nations over the years, names are incredibly special to us... highly individualized. These name lists for Westernized names are too generic...

As we saw in the Heidi and Spencer case, it's a way to make you or your children seem special. I.e., like a celebrity.

you can find a numerous of baby names in the below list... check it..

In the case of Heidi and Spencer that's an altogether different meaning of special, though.

It's about time this story was told. I am co-publisher on a baby names site (Baby Names Garden) and we have purposely held off doing a Native American names list because we don't have the expertise. I'm delighted you have brought this to light, and I have tweeted your blog post to our Twitter page and added to our Facebook page. When we do put a list together, maybe you could give it a look over and proofread it for us! Thanks.

"DAKOTA: Baby name books claim that this is a Sioux name meaning "friend," but it is not. It is the name of a Sioux tribe"

In another category are authentic Native names that have crossed over to become part of the general name pool. Such as Winona.

Being a smart aleck, If asked for an authentic Indian name, I usually reply something like Maksheesh Patel.
If it is a fellow writer, I supply the type of name you find among Native friends, like, Al Walker, or Suzy Harjo.

The Altius directory contains some of the phony Indian names this posting warns about. For that reason, I suggest you avoid it.