Here's the beginning of a letter written by Linda Greene to her Native grandson's school:Stereotypes = attacks

What I find interesting isn't the March 11 incident, but the years of racial attacks Cyrus had to endure. Greene's letter spells them out:And:And:And:"Injuns and Injunettes"

Is this some sort of weird isolated incident? The volume of evidence about the harm of Native stereotyping suggests not. So does the following article on Senate Bill 107, the Colorado American Indian Mascot Regulation bill:

By Simon Moya-SmithLet's pull together some of my previous postings to sum up the situation.

Kids like to taunt other kids about their physical differences. No doubt bullying is a universal problem, but it doesn't help that asserting our racial and cultural superiority by demonizing others is a common theme in US history.

In any case, kids are pathetically ignorant about Indians. They don't know anything but the Native stereotypes they see in the culture and media. Another term for our culture and media might be "cultural commons," where apologists excuse stereotypes because they supposedly belong to everyone.

What kids know about Indians includes: hatchets, feathers, and the color red; phony tribes, headdresses, and totem poles; and Indians shot arrows and died. In other words, a mishmash of mistakes and stereotypes.

No doubt most teachers mean well, but they often do as much harm as good. So we have kids in headdresses learning Creek lore, "Grey Eagle" teaching stereotypes, and the ubiquitous playing Indian for Thanksgiving. Even if the information is accurate, which is rare, it positions Indians as primitive people of the past.

What schools should do

For starters, the notion that you can raise your children to be "color-blind" is sadly mistaken. Kids see racial characteristics whether you teach them to or not. Telling them to be color-blind is telling them to accept racism as the norm.

As Cyrus's grandmother Linda Greene learned, instructing kids that "names will never hurt them" is worthless. That doesn't stop the bullying or teach kids an effective way to handle it. Greene didn't get results until she confronted the school with her letters.

Adults who claim Native stereotypes are a minor problem, harmless, or "just plain fun" are nothing but ignoramuses. They may have the decades of training to resist insults or slurs--although I bet I could drive most of them to rage or tears. But to expect children to have the same defenses is illogical and asinine. It's like saying a big dog can bite its master so it's okay to kick a puppy.

How can kids learn about Native culture? By reading good books, attending powwows, teleconferencing with Indians, or meeting Indians in person. In short, by avoiding bad information and seeking good information.

Epilogue: Cyrus's story has a reasonably happy ending. Greene's letters triggered a district-wide meeting about the situation. That didn't resolve the issues, but it made people aware of them. As Greene writes:A phone call to the parents? Not exactly scary stuff. A suspension and threat of expulsion would be better.

Schools should have detailed policies in place to deal with this kind of problem. As with child abuse or suicidal behavior, officials should treat reports of bullying as deadly serious. Bring in the kids and their parents, tell them the bullying will stop, and lay out the penalties if it doesn't. (If this isn't the best response to bullying according to the evidence, then do whatever is the best response.)

Make sure the teachers and staff are trained in cultural sensitivity. Do seek out innovative programs that teach students about today's Indians as well as their histories and cultures. And don't use stereotypical books that win awards but are denounced by the critics who know best.

Below:  An all-too-typical example of teaching about Indians in school. 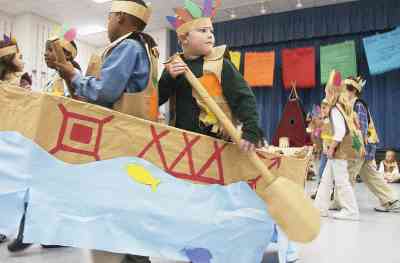 Whites--the so called "Master Race", yet they still don't know hoot about Natives, even after 500 years later. As for the "phone call" bit, is a joke quite laughable. Its basically a slap on the wrist. A case of double-standards. My question is--are there any Blacks and Latinos in that school? Or is Cyrus the only non-White? If so, I say it spells trouble. I spent my elementary years in Phoenix, and it was as diverse as any other metropolitan school. Race wasn't the issue at my school. Which was a good thing, because I wasn't exposed to it and didn't know what "racist" meant and never heard of "racism" or "stereotypes" until I reached Jr. High(8th). Being exposed to other races, gives you good insight of other people as well as social skills needed for the greater American public environment. It shows you that everyone has feelings and we're all human. I can see why in all White school, there is evil taught there, generally fear, a fear of the non-White or of those who look different. So techniccally the end results is--ignorance begets ingorance. Which is why, its not really a good idea to attend an all White school as a non-White. It surely be problematic for those children when they reach adulthood, they are unprepared to react/interact appropiately with the non-White in the general public.