Students draw what they know

By Kevin AbourezkAnd:How would you define a Native American?

Some representative drawings from the survey and possible sources for the images: 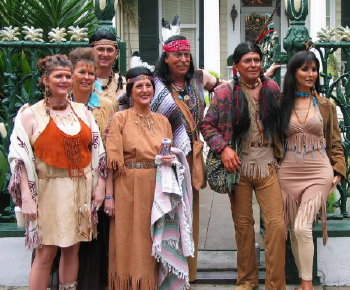 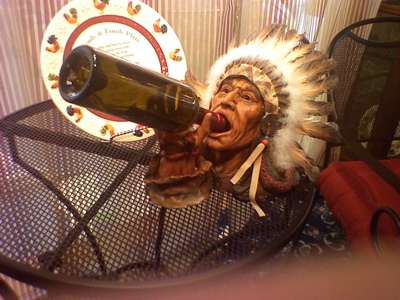 Comment:  This is perfect. The students admitted they don't know anything about Indians. Their drawings prove their heads are filled with stereotypes.

The few who took classes about Indians or knew Indians personally drew fewer stereotypes. The researcher states the only possible conclusion: that most people get their Indian "information" from the media. Not from personal experience, but from words and images repeated throughout our culture.

One probably could quiz every American and get the same story from 98% of them. "I've never met any Indians. I'm not sure if they're still alive. All I know about them are chiefs, teepees, arrows, feathers, drums, booze, and casinos. I know these things because I saw them in movies and on TV."

Indians are idiots too

People think the sky is blue because that's what they see. They think Indians are stereotypical chiefs and warriors for the same reason. Monkey see, monkey believe.

For more on what youngsters know about Indians, see:

For more on the subject in general, see The Harm of Native Stereotyping:  Facts and Evidence.
Posted by Rob at 9:04 PM

This is excellent. Whenever I speak in classrooms, I start the discussion with, What do you know about Indians? The things kids have said would make your head spin, but its a great place to begin the discussion of stereotypes.

Having the kids do drawings is ten times better because it proves without a shadow of a doubt why formal education about Native people historically and today is of the utmost importance.

Why does Rob think its "perfect" because these youngsters don't know hoot about Natives??? Ignorance doesn't justify perfection. But instead they need EDUCATION. Indeed, its true that some Natives are idiots like the ones that are promoting racist sports teams mascots, thinking they(white clowns dressed as Natives) are honoring them when they actually don't. But they make up the 1% in the Native communities. Which is why the UND's racist logo was retired.

"This is perfect" as in a perfect encapsulation of the problem. As my subsequent comments made clear.