Adrienne Keene notes the prevalence of Indian headdresses at the Coachella music festival:

The Hipster Headdress Abounds at CoachellaComment:  Adrienne gives us six examples of headdresses in her posting, including the one below.

Adrienne has been covering the "hipster headdress" phenomenon since she began her blog in January 2010. I'm not sure it's a trend or anything new. People have been dressing up as Indians since the Boston Tea Party, at least. Examples of non-Indians wearing headdresses abound in our culture. You can find them throughout the last decade of the Stereotype of the Month contest and before.

If there is a trend, it's part of an increasing hostility toward minorities. The evidence includes the conservative hard line toward immigrants, student parties involving blackface and nooses, English-only laws, race-based attacks on the Obamas, and the many instances of Tea Party hatemongering.

Wearing a headdress seems benign compared to these examples, but the attitude behind the act is similar. Like mascot lovers, these Indian wannabes are asserting their superiority in a socially acceptable way. "We're white, we can do whatever we want, and you can't stop us."

For more on Coachella, see "A Sight for Squaw Eyes." For more on the subject in general, see The Big Chief and Indian Wannabes. 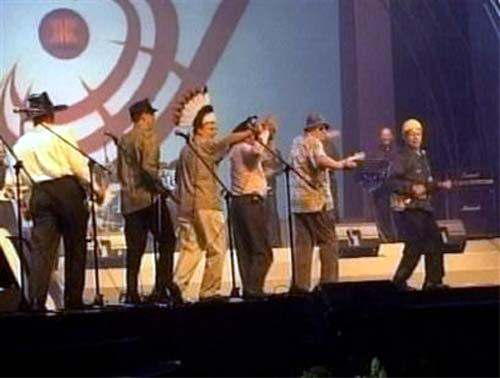 Its probably based on the notion that Whites don't fully have a sense identity. So they play dress-ups like little "girlie men"(Cali Gov.Arnold's phrase). Its nothing new, if it has been going on since the Boston Tea Party centuries ago. Therefore, its true that the bitter White man is attacking Blacks more than any other ethnic group(because we have a Black President), followed by Latinos(hence--the hot topic of Immigration debate see Arizona's new racist law). In case point, to prove this attack on Blacks is widespread, a Facebook webpage promotes the death of Obama, which has over 1million backers. The article can also be read at the Southern Poverty Law Center's website. The vitroilic White Man's attacks on Natives is almost moot compared to those on Blacks and Latinos.

Is that Rob's idea of putting a head dress on Obama? I don't recall ever seeing Obama dressing up as a Native. This is nothing more than his usual typical satirical sensationalism. Obama has *probably* done more for Natives than most presidents ever did. And this is only his first year. He has yet,(which is possible) to sign the Declaration of Rights for Indigenous Peoples. As evident by Susan Rice the U.S. Ambassador to the U.N. He is also the only standing president to address the recent Gathering of Nations.

There are no pictures of Barack Obama in this posting, Geno. The man wearing a headdress is Arnold Schwarzenegger, not Obama. Is that the image you're referring to?

That one of Obama looks fake. Too much forehead, or something about the angles of his head relative to the headdress.

There's no picture of Barack Obama--only a picture of Arnold Schwarzenegger.