Racists vs. reformers on Islam

If you're a bigot like reader Stpehen M., you think Islam is inherently evil. If you're not as blind and unthinking as he is, you understand that repressive regimes are using Islam to maintain their power. It's much the same as how Western monarchies used Christianity for a millennium-plus to legitimize their power and suppress dissent.

This repression tells you little or nothing about the underlying religion. People are perverting the religion--using the contradictions inherent in any thousand-page text--to justify their actions. If you wanted to, you could base a dictatorship on Shakespeare's plays, The Wizard of Oz, or the dictionary as well as the Bible or the Koran.

By Ramzy BaroudTo Perpetuate Their Dictatorships, Arab Rulers Resort To The Islamic Creed

By Thomas L. FriedmanComment:  For more on Stephen's views, see Islamophobia Just Like Stephen's and Stephen's Bigotry Against Muslims. For more on the subject in general, see Understanding Islam. 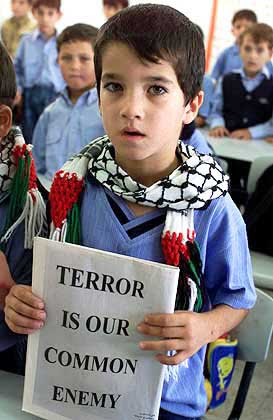