Today we celebrate the brown-skinned, anti-war socialist who gave away free healthcare.

Some info on the indigenous (European) roots of Easter: 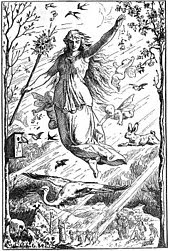